(a) An infinitesimal amount of heat is added reversibly to a system. By combining the first and second laws, show that . (b) When heat is added to an ideal gas, its temperature and volume change from . Show that the entropy change of n moles of the gas is given by

Using the result of the preceding problem, show that for an ideal gas undergoing an adiabatic process, is constant.

With the help of the two preceding problems, show that between states 1 and 2 of n moles an ideal gas is given by

A cylinder contains 500 g of helium at 120 atm and . The valve is leaky, and all the gas slowly escapes isothermally into the atmosphere. Use the results of the preceding problem to determine the resulting change in entropy of the universe.

A diatomic ideal gas is brought from an initial equilibrium state at and to a final stage with and Use the results of the previous problem to determine the entropy change per mole of the gas.

The gasoline internal combustion engine operates in a cycle consisting of six parts. Four of these parts involve, among other things, friction, heat exchange through finite temperature differences, and accelerations of the piston; it is irreversible. Nevertheless, it is represented by the ideal reversible Otto cycle, which is illustrated below. The working substance of the cycle is assumed to be air. The six steps of the Otto cycle are as follows:

where . The quantity r is called the compression ratio of the engine.

(c) In practice, r is kept less than around 7. For larger values, the gasoline-air mixture is compressed to temperatures so high that it explodes before the finely timed spark is delivered. This preignition causes engine knock and loss of power. Show that for and (the value for air), , or an efficiency of Because of the many irreversible processes, an actual internal combustion engine has an efficiency much less than this ideal value. A typical efficiency for a tuned engine is about . 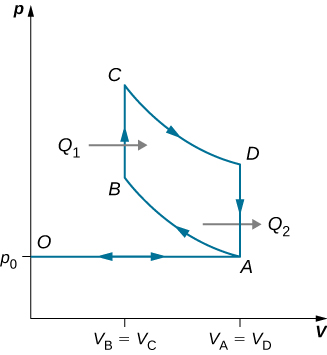 An ideal diesel cycle is shown below. This cycle consists of five strokes. In this case, only air is drawn into the chamber during the intake stroke OA. The air is then compressed adiabatically from state A to state B, raising its temperature high enough so that when fuel is added during the power stroke BC, it ignites. After ignition ends at C, there is a further adiabatic power stroke CD. Finally, there is an exhaust at constant volume as the pressure drops from to , followed by a further exhaust when the piston compresses the chamber volume to zero.

(b) Use the fact that and are adiabatic to show that 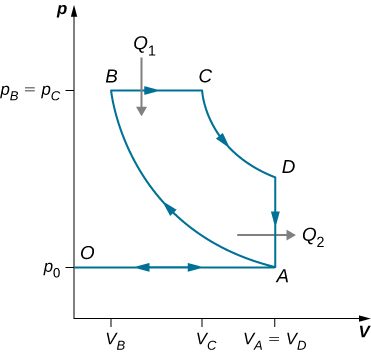 Consider an ideal gas Joule cycle, also called the Brayton cycle, shown below. Find the formula for efficiency of the engine using this cycle in terms of , , and . 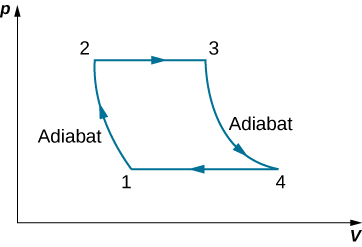 Derive a formula for the coefficient of performance of a refrigerator using an ideal gas as a working substance operating in the cycle shown below in terms of the properties of the three states labeled 1, 2, and 3. 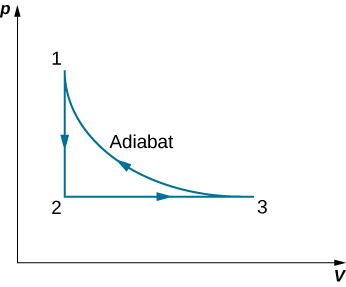 Two moles of nitrogen gas, with for ideal diatomic gases, occupies a volume of in an insulated cylinder at temperature 300 K. The gas is adiabatically and reversibly compressed to a volume of 5 L. The piston of the cylinder is locked in its place, and the insulation around the cylinder is removed. The heat-conducting cylinder is then placed in a 300-K bath. Heat from the compressed gas leaves the gas, and the temperature of the gas becomes 300 K again. The gas is then slowly expanded at the fixed temperature 300 K until the volume of the gas becomes , thus making a complete cycle for the gas. For the entire cycle, calculate (a) the work done by the gas, (b) the heat into or out of the gas, (c) the change in the internal energy of the gas, and (d) the change in entropy of the gas.

A Carnot refrigerator, working between and is used to cool a bucket of water containing of water at to in 2 hours. Find the total amount of work needed.