In Forces, we gave a brief problem-solving strategy to help you understand free-body diagrams. Here, we add some details to the strategy that will help you in constructing these diagrams.

Observe the following rules when constructing a free-body diagram:

Let’s apply the problem-solving strategy in drawing a free-body diagram for a sled. In Figure 5.31(a), a sled is pulled by force P at an angle of . In part (b), we show a free-body diagram for this situation, as described by steps 1 and 2 of the problem-solving strategy. In part (c), we show all forces in terms of their x- and y-components, in keeping with step 3.

Two Blocks on an Inclined Plane

Construct the free-body diagram for object A and object B in Figure 5.32.

We follow the four steps listed in the problem-solving strategy.

We start by creating a diagram for the first object of interest. In Figure 5.32(a), object A is isolated (circled) and represented by a dot.
Figure 5.32 (a) The free-body diagram for isolated object A. (b) The free-body diagram for isolated object B. Comparing the two drawings, we see that friction acts in the opposite direction in the two figures. Because object A experiences a force that tends to pull it to the right, friction must act to the left. Because object B experiences a component of its weight that pulls it to the left, down the incline, the friction force must oppose it and act up the ramp. Friction always acts opposite the intended direction of motion.

We now include any force that acts on the body. Here, no applied force is present. The weight of the object acts as a force pointing vertically downward, and the presence of the cord indicates a force of tension pointing away from the object. Object A has one interface and hence experiences a normal force, directed away from the interface. The source of this force is object B, and this normal force is labeled accordingly. Since object B has a tendency to slide down, object A has a tendency to slide up with respect to the interface, so the friction is directed downward parallel to the inclined plane.

As noted in step 4 of the problem-solving strategy, we then construct the free-body diagram in Figure 5.32(b) using the same approach. Object B experiences two normal forces and two friction forces due to the presence of two contact surfaces. The interface with the inclined plane exerts external forces of and , and the interface with object B exerts the normal force and friction ; is directed away from object B, and is opposing the tendency of the relative motion of object B with respect to object A.

The object under consideration in each part of this problem was circled in gray. When you are first learning how to draw free-body diagrams, you will find it helpful to circle the object before deciding what forces are acting on that particular object. This focuses your attention, preventing you from considering forces that are not acting on the body.

A force is applied to two blocks in contact, as shown.

Draw a free-body diagram for each block. Be sure to consider Newton’s third law at the interface where the two blocks touch. 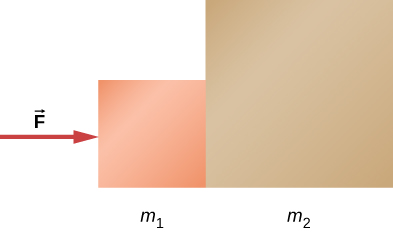 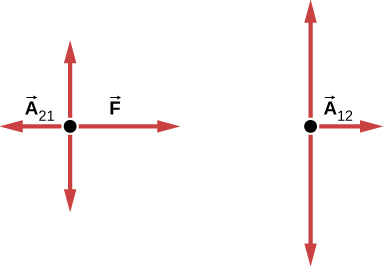 Block on the Table (Coupled Blocks)

We assume that the string has no mass so that we do not have to consider it as a separate object. Draw a free-body diagram for each block. 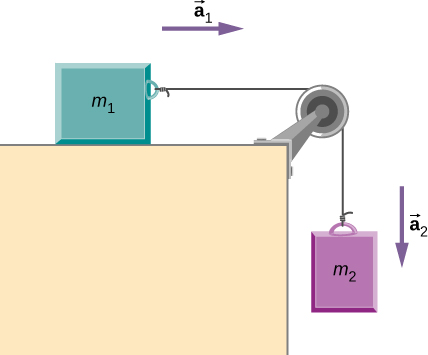 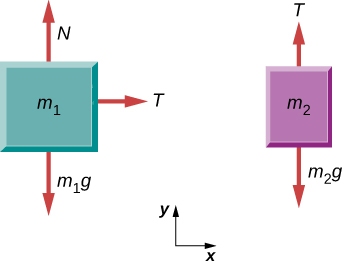 Each block accelerates (notice the labels shown for and ); however, assuming the string remains taut, the magnitudes of acceleration are equal. Thus, we have . If we were to continue solving the problem, we could simply call the acceleration . Also, we use two free-body diagrams because we are usually finding tension T, which may require us to use a system of two equations in this type of problem. The tension is the same on both .

(a) Draw the free-body diagram for the situation shown. (b) Redraw it showing components; use x-axes parallel to the two ramps. 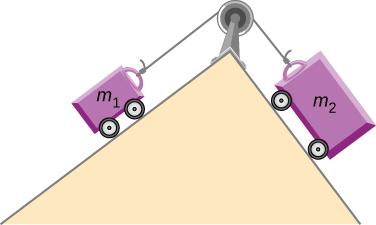 View this simulation to predict, qualitatively, how an external force will affect the speed and direction of an object’s motion. Explain the effects with the help of a free-body diagram. Use free-body diagrams to draw position, velocity, acceleration, and force graphs, and vice versa. Explain how the graphs relate to one another. Given a scenario or a graph, sketch all four graphs.