We have been exploring vectors and vector operations in three-dimensional space, and we have developed equations to describe lines, planes, and spheres. In this section, we use our knowledge of planes and spheres, which are examples of three-dimensional figures called surfaces, to explore a variety of other surfaces that can be graphed in a three-dimensional coordinate system.

The first surface we’ll examine is the cylinder. Although most people immediately think of a hollow pipe or a soda straw when they hear the word cylinder, here we use the broad mathematical meaning of the term. As we have seen, cylindrical surfaces don’t have to be circular. A rectangular heating duct is a cylinder, as is a rolled-up yoga mat, the cross-section of which is a spiral shape.

In the two-dimensional coordinate plane, the equation describes a circle centered at the origin with radius In three-dimensional space, this same equation represents a surface. Imagine copies of a circle stacked on top of each other centered on the z-axis (Figure 2.75), forming a hollow tube. We can then construct a cylinder from the set of lines parallel to the z-axis passing through circle in the xy-plane, as shown in the figure. In this way, any curve in one of the coordinate planes can be extended to become a surface.

Figure 2.75 In three-dimensional space, the graph of equation is a cylinder with radius centered on the z-axis. It continues indefinitely in the positive and negative directions.

A set of lines parallel to a given line passing through a given curve is known as a cylindrical surface, or cylinder. The parallel lines are called rulings.

From this definition, we can see that we still have a cylinder in three-dimensional space, even if the curve is not a circle. Any curve can form a cylinder, and the rulings that compose the cylinder may be parallel to any given line (Figure 2.76).

Figure 2.76 In three-dimensional space, the graph of equation is a cylinder, or a cylindrical surface with rulings parallel to the y-axis.

Sketch the graphs of the following cylindrical surfaces.

When sketching surfaces, we have seen that it is useful to sketch the intersection of the surface with a plane parallel to one of the coordinate planes. These curves are called traces. We can see them in the plot of the cylinder in Figure 2.80.

The traces of a surface are the cross-sections created when the surface intersects a plane parallel to one of the coordinate planes.

Figure 2.80 (a) This is one view of the graph of equation (b) To find the trace of the graph in the xz-plane, set The trace is simply a two-dimensional sine wave.

Traces are useful in sketching cylindrical surfaces. For a cylinder in three dimensions, though, only one set of traces is useful. Notice, in Figure 2.80, that the trace of the graph of in the xz-plane is useful in constructing the graph. The trace in the xy-plane, though, is just a series of parallel lines, and the trace in the yz-plane is simply one line.

Cylindrical surfaces are formed by a set of parallel lines. Not all surfaces in three dimensions are constructed so simply, however. We now explore more complex surfaces, and traces are an important tool in this investigation.

We have learned about surfaces in three dimensions described by first-order equations; these are planes. Some other common types of surfaces can be described by second-order equations. We can view these surfaces as three-dimensional extensions of the conic sections we discussed earlier: the ellipse, the parabola, and the hyperbola. We call these graphs quadric surfaces.

When a quadric surface intersects a coordinate plane, the trace is a conic section.

The trace of an ellipsoid is an ellipse in each of the coordinate planes. However, this does not have to be the case for all quadric surfaces. Many quadric surfaces have traces that are different kinds of conic sections, and this is usually indicated by the name of the surface. For example, if a surface can be described by an equation of the form then we call that surface an elliptic paraboloid. The trace in the xy-plane is an ellipse, but the traces in the xz-plane and yz-plane are parabolas (Figure 2.83). Other elliptic paraboloids can have other orientations simply by interchanging the variables to give us a different variable in the linear term of the equation or

Figure 2.83 This quadric surface is called an elliptic paraboloid.

Describe the traces of the elliptic paraboloid

Hyperboloids of one sheet have some fascinating properties. For example, they can be constructed using straight lines, such as in the sculpture in Figure 2.85(a). In fact, cooling towers for nuclear power plants are often constructed in the shape of a hyperboloid. The builders are able to use straight steel beams in the construction, which makes the towers very strong while using relatively little material (Figure 2.85(b)).

Chapter Opener: Finding the Focus of a Parabolic Reflector

Figure 2.86 Energy reflects off of the parabolic reflector and is collected at the focal point. (credit: modification of CGP Grey, Wikimedia Commons)

Seventeen standard quadric surfaces can be derived from the general equation

The following figures summarizes the most important ones.

In the following two figures, the “axis” of a quadric surface may or may not be an axis of symmetry. However, all traces on the surface formed by any plane perpendicular to an “axis” will be of the same conic section type.

Identify the surfaces represented by the given equations.

Identify the surface represented by equation

For the following exercises, sketch and describe the cylindrical surface of the given equation.

For the following exercises, the graph of a quadric surface is given. 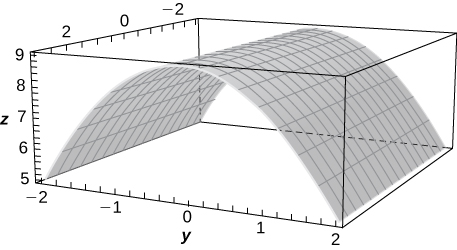 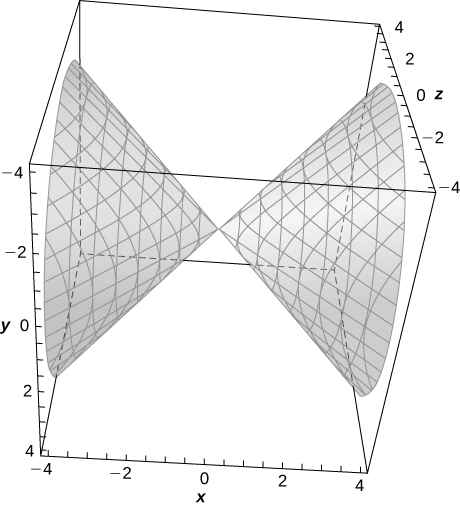 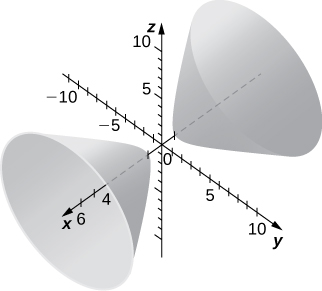 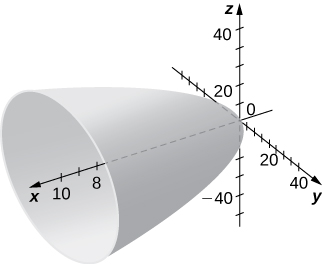 For the following exercises, match the given quadric surface with its corresponding equation in standard form.

Hyperboloid of one sheet

For the following exercises, rewrite the given equation of the quadric surface in standard form. Identify the surface.

For the following exercises, find the trace of the given quadric surface in the specified plane of coordinates and sketch it.

Use the graph of the given quadric surface to answer the questions. 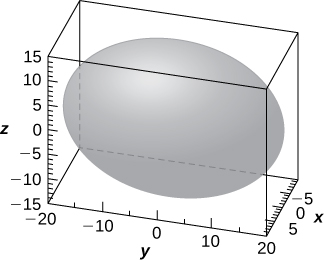 Use the graph of the given quadric surface to answer the questions. 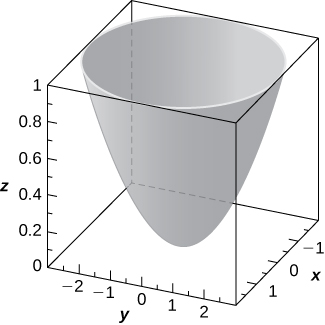 For the following exercises, the equation of a quadric surface is given.

Find the equation of the quadric surface with points that are equidistant from point and plane of equation Identify the surface.

Find the equation of the quadric surface with points that are equidistant from point and plane of equation Identify the surface.

If the surface of a parabolic reflector is described by equation find the focal point of the reflector.

[T] The intersection between cylinder and sphere is called a Viviani curve. 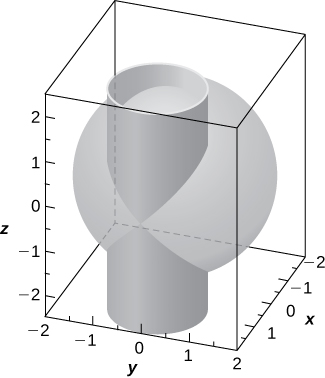 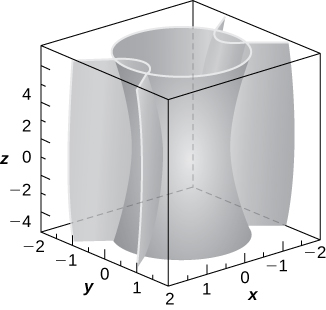 [T] A spheroid is an ellipsoid with two equal semiaxes. For instance, the equation of a spheroid with the z-axis as its axis of symmetry is given by where and are positive real numbers. The spheroid is called oblate if and prolate for

[T] In cartography, Earth is approximated by an oblate spheroid rather than a sphere. The radii at the equator and poles are approximately mi and mi, respectively.

[T] A set of buzzing stunt magnets (or “rattlesnake eggs”) includes two sparkling, polished, superstrong spheroid-shaped magnets well-known for children’s entertainment. Each magnet is in. long and in. wide at the middle. While tossing them into the air, they create a buzzing sound as they attract each other.

[T] A heart-shaped surface is given by equation

[T] The ring torus symmetric about the z-axis is a special type of surface in topology and its equation is given by where The numbers and are called are the major and minor radii, respectively, of the surface. The following figure shows a ring torus for which 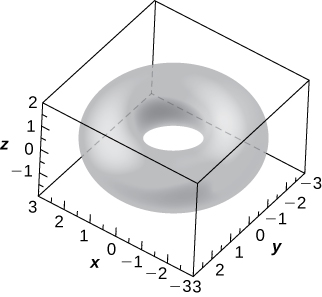