Anyone who has used a microwave oven knows there is energy in electromagnetic waves. Sometimes this energy is obvious, such as in the warmth of the summer Sun. Other times, it is subtle, such as the unfelt energy of gamma rays, which can destroy living cells.

Electromagnetic waves bring energy into a system by virtue of their electric and magnetic fields. These fields can exert forces and move charges in the system and, thus, do work on them. However, there is energy in an electromagnetic wave itself, whether it is absorbed or not. Once created, the fields carry energy away from a source. If some energy is later absorbed, the field strengths are diminished and anything left travels on.

Figure 16.10 Energy carried by a wave depends on its amplitude. With electromagnetic waves, doubling the E fields and B fields quadruples the energy density u and the energy flux uc.

For a plane wave traveling in the direction of the positive x-axis with the phase of the wave chosen so that the wave maximum is at the origin at , the electric and magnetic fields obey the equations

The energy density moves with the electric and magnetic fields in a similar manner to the waves themselves.

We can find the rate of transport of energy by considering a small time interval . As shown in Figure 16.11, the energy contained in a cylinder of length and cross-sectional area A passes through the cross-sectional plane in the interval

Figure 16.11 The energy contained in the electric and magnetic fields of the electromagnetic wave in the volume passes through the area A in time .

The energy passing through area A in time is

The energy per unit area per unit time passing through a plane perpendicular to the wave, called the energy flux and denoted by S, can be calculated by dividing the energy by the area A and the time interval .

More generally, the flux of energy through any surface also depends on the orientation of the surface. To take the direction into account, we introduce a vector , called the Poynting vector, with the following definition:

The energy flux at any place also varies in time, as can be seen by substituting u from Equation 16.23 into Equation 16.27.

Because the frequency of visible light is very high, of the order of the energy flux for visible light through any area is an extremely rapidly varying quantity. Most measuring devices, including our eyes, detect only an average over many cycles. The time average of the energy flux is the intensity I of the electromagnetic wave and is the power per unit area. It can be expressed by averaging the cosine function in Equation 16.29 over one complete cycle, which is the same as time-averaging over many cycles (here, T is one period):

We can either evaluate the integral, or else note that because the sine and cosine differ merely in phase, the average over a complete cycle for is the same as for , to obtain

where the angle brackets stand for the time-averaging operation. The intensity of light moving at speed c in vacuum is then found to be

We can use whichever of the three preceding equations is most convenient, because the three equations are really just different versions of the same result: The energy in a wave is related to amplitude squared. Furthermore, because these equations are based on the assumption that the electromagnetic waves are sinusoidal, the peak intensity is twice the average intensity; that is,

The beam from a small laboratory laser typically has an intensity of about . Assuming that the beam is composed of plane waves, calculate the amplitudes of the electric and magnetic fields in the beam.

From Equation 16.31, the intensity of the laser beam is

The amplitude of the electric field is therefore

The amplitude of the magnetic field can be obtained from Equation 16.20:

A light bulb emits 5.00 W of power as visible light. What are the average electric and magnetic fields from the light at a distance of 3.0 m?

Assume the bulb’s power output P is distributed uniformly over a sphere of radius 3.0 m to calculate the intensity, and from it, the electric field. 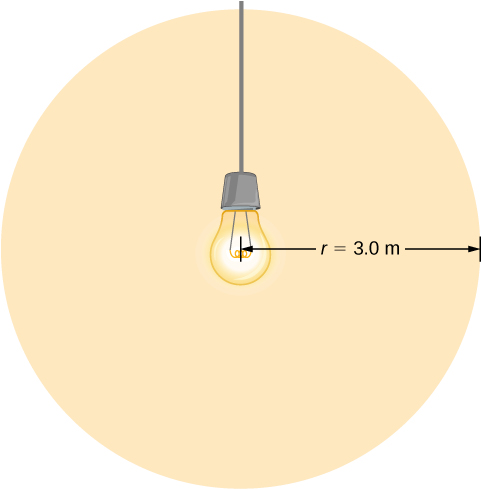 The power radiated as visible light is then

The intensity I falls off as the distance squared if the radiation is dispersed uniformly in all directions.

A 60-kW radio transmitter on Earth sends its signal to a satellite 100 km away (Figure 16.12). At what distance in the same direction would the signal have the same maximum field strength if the transmitter’s output power were increased to 90 kW?
Figure 16.12 In three dimensions, a signal spreads over a solid angle as it travels outward from its source.

The area over which the power in a particular direction is dispersed increases as distance squared, as illustrated in the figure. Change the power output P by a factor of (90 kW/60 kW) and change the area by the same factor to keep the same. Then use the proportion of area A in the diagram to distance squared to find the distance that produces the calculated change in area.

Using the proportionality of the areas to the squares of the distances, and solving, we obtain from the diagram

The range of a radio signal is the maximum distance between the transmitter and receiver that allows for normal operation. In the absence of complications such as reflections from obstacles, the intensity follows an inverse square law, and doubling the range would require multiplying the power by four.
PreviousNext
Order a print copy