We have just seen that some circuits may be analyzed by reducing a circuit to a single voltage source and an equivalent resistance. Many complex circuits cannot be analyzed with the series-parallel techniques developed in the preceding sections. In this section, we elaborate on the use of Kirchhoff’s rules to analyze more complex circuits. For example, the circuit in Figure 10.19 is known as a multi-loop circuit, which consists of junctions. A junction, also known as a node, is a connection of three or more wires. In this circuit, the previous methods cannot be used, because not all the resistors are in clear series or parallel configurations that can be reduced. Give it a try. The resistors and are in series and can be reduced to an equivalent resistance. The same is true of resistors and . But what do you do then?

Even though this circuit cannot be analyzed using the methods already learned, two circuit analysis rules can be used to analyze any circuit, simple or complex. The rules are known as Kirchhoff’s rules, after their inventor Gustav Kirchhoff (1824–1887).

Figure 10.19 This circuit cannot be reduced to a combination of series and parallel connections. However, we can use Kirchhoff’s rules to analyze it.

We now provide explanations of these two rules, followed by problem-solving hints for applying them and a worked example that uses them.

Kirchhoff’s first rule (the junction rule) applies to the charge entering and leaving a junction (Figure 10.20). As stated earlier, a junction, or node, is a connection of three or more wires. Current is the flow of charge, and charge is conserved; thus, whatever charge flows into the junction must flow out.

Kirchhoff’s second rule (the loop rule) applies to potential differences. The loop rule is stated in terms of potential V rather than potential energy, but the two are related since In a closed loop, whatever energy is supplied by a voltage source, the energy must be transferred into other forms by the devices in the loop, since there are no other ways in which energy can be transferred into or out of the circuit. Kirchhoff’s loop rule states that the algebraic sum of potential differences, including voltage supplied by the voltage sources and resistive elements, in any loop must be equal to zero. For example, consider a simple loop with no junctions, as in Figure 10.21.

Figure 10.21 A simple loop with no junctions. Kirchhoff’s loop rule states that the algebraic sum of the voltage differences is equal to zero.

Figure 10.22 shows a graph of the voltage as we travel around the loop. Voltage increases as we cross the battery, whereas voltage decreases as we travel across a resistor. The potential drop, or change in the electric potential, is equal to the current through the resistor times the resistance of the resistor. Since the wires have negligible resistance, the voltage remains constant as we cross the wires connecting the components.

The loop equation can be used to find the current through the loop:

This loop could have been analyzed using the previous methods, but we will demonstrate the power of Kirchhoff’s method in the next section.

By applying Kirchhoff’s rules, we generate a set of linear equations that allow us to find the unknown values in circuits. These may be currents, voltages, or resistances. Each time a rule is applied, it produces an equation. If there are as many independent equations as unknowns, then the problem can be solved.

The number of nodes depends on the circuit. Each current should be included in a node and thus included in at least one junction equation. Do not include nodes that are not linearly independent, meaning nodes that contain the same information.

Figure 10.24 At first glance, this circuit contains two junctions, Junction b and Junction e, but only one should be considered because their junction equations are equivalent.

Consider the circuit in Figure 10.26(a). Let us analyze this circuit to find the current through each resistor. First, label the circuit as shown in part (b).

Figure 10.26 (a) A multi-loop circuit. (b) Label the circuit to help with orientation.

Next, determine the junctions. In this circuit, points b and e each have three wires connected, making them junctions. Start to apply Kirchhoff’s junction rule by drawing arrows representing the currents and labeling each arrow, as shown in Figure 10.27(b). Junction b shows that and Junction e shows that . Since Junction e gives the same information of Junction b, it can be disregarded. This circuit has three unknowns, so we need three linearly independent equations to analyze it.

Figure 10.27 (a) This circuit has two junctions, labeled b and e, but only node b is used in the analysis. (b) Labeled arrows represent the currents into and out of the junctions.

Figure 10.28 Choose the loops in the circuit.

Finally, we check loop ebcde. We start at point e and move to point b, crossing in the opposite direction as the current flow . The potential drop is added. Next, we cross and in the same direction as the current flow and subtract the potential drops and Note that the current is the same through resistors and , because they are connected in series. Finally, the voltage source is crossed from the positive terminal to the negative terminal, and the voltage source is subtracted. The sum of these voltage differences equals zero and yields the loop equation

We now have three equations, which we can solve for the three unknowns.

To solve the three equations for the three unknown currents, start by eliminating current . First add Eq. (1) times to Eq. (2). The result is labeled as Eq. (4):

We can solve Eqs. (4) and (5) for current . Adding seven times Eq. (4) and three times Eq. (5) results in or Using Eq. (4) results in Finally, Eq. (1) yields One way to check that the solutions are consistent is to check the power supplied by the voltage sources and the power dissipated by the resistors:

Note that the solution for the current is negative. This is the correct answer, but suggests that the arrow originally drawn in the junction analysis is the direction opposite of conventional current flow. The power supplied by the second voltage source is 58 W and not −58 W.

This circuit is sufficiently complex that the currents cannot be found using Ohm’s law and the series-parallel techniques—it is necessary to use Kirchhoff’s rules. Currents have been labeled and in the figure, and assumptions have been made about their directions. Locations on the diagram have been labeled with letters a through h. In the solution, we apply the junction and loop rules, seeking three independent equations to allow us to solve for the three unknown currents.

A method to check the calculations is to compute the power dissipated by the resistors and the power supplied by the voltage sources:

The power supplied equals the power dissipated by the resistors.

Check Your Understanding In considering the following schematic and the power supplied and consumed by a circuit, will a voltage source always provide power to the circuit, or can a voltage source consume power? 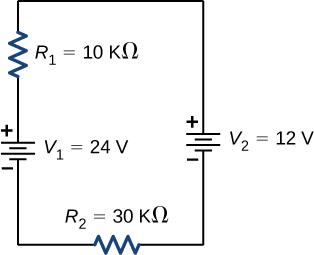 Find the current flowing in the circuit in Figure 10.30.
Figure 10.30 This circuit consists of three resistors and two batteries connected in series. Note that the batteries are connected with opposite polarities.

This circuit can be analyzed using Kirchhoff’s rules. There is only one loop and no nodes. Choose the direction of current flow. For this example, we will use the clockwise direction from point a to point b. Consider Loop abcda and use Figure 10.23 to write the loop equation. Note that according to Figure 10.23, battery will be added and battery will be subtracted.

Applying the junction rule yields the following three equations. We have one unknown, so one equation is required:

Simplify the equations by placing the unknowns on one side of the equations. Use the values given in the figure.

Many devices require more than one battery. Multiple voltage sources, such as batteries, can be connected in series configurations, parallel configurations, or a combination of the two.

Figure 10.31 (a) Two batteries connected in series with a load resistor. (b) The circuit diagram of the two batteries and the load resistor, with each battery modeled as an idealized emf source and an internal resistance.

Note that the same current I is found in each battery because they are connected in series. The disadvantage of series connections of cells is that their internal resistances are additive.

Batteries are connected in series to increase the voltage supplied to the circuit. For instance, an LED flashlight may have two AAA cell batteries, each with a terminal voltage of 1.5 V, to provide 3.0 V to the flashlight.

Any number of batteries can be connected in series. For N batteries in series, the terminal voltage is equal to

where the equivalent resistance is .

When a load is placed across voltage sources in series, as in Figure 10.32, we can find the current:

As expected, the internal resistances increase the equivalent resistance.

Figure 10.32 Two batteries connect in series to an LED bulb, as found in a flashlight.

Figure 10.33 (a) Two batteries connect in parallel to a load resistor. (b) The circuit diagram shows the shows battery as an emf source and an internal resistor. The two emf sources have identical emfs (each labeled by ) connected in parallel that produce the same emf.

Consider the Kirchhoff analysis of the circuit in Figure 10.33(b). There are two loops and a node at point b and .

Solving for the current through the load resistor results in , where . The terminal voltage is equal to the potential drop across the load resistor . The parallel connection reduces the internal resistance and thus can produce a larger current.

Any number of batteries can be connected in parallel. For N batteries in parallel, the terminal voltage is equal to

where the equivalent resistance is .

As an example, some diesel trucks use two 12-V batteries in parallel; they produce a total emf of 12 V but can deliver the larger current needed to start a diesel engine.

Another example dealing with multiple voltage sources is that of combinations of solar cells—wired in both series and parallel combinations to yield a desired voltage and current. Photovoltaic generation, which is the conversion of sunlight directly into electricity, is based upon the photoelectric effect. The photoelectric effect is beyond the scope of this chapter and is covered in Photons and Matter Waves, but in general, photons hitting the surface of a solar cell create an electric current in the cell.

Most solar cells are made from pure silicon. Most single cells have a voltage output of about 0.5 V, while the current output is a function of the amount of sunlight falling on the cell (the incident solar radiation known as the insolation). Under bright noon sunlight, a current per unit area of about of cell surface area is produced by typical single-crystal cells.

Individual solar cells are connected electrically in modules to meet electrical energy needs. They can be wired together in series or in parallel—connected like the batteries discussed earlier. A solar-cell array or module usually consists of between 36 and 72 cells, with a power output of 50 W to 140 W.