5.3 Explain and Compute Equivalent Units and Total Cost of Production in an Initial Processing Stage

As described previously, process costing can have more than one work in process account. Determining the value of the work in process inventory accounts is challenging because each product is at varying stages of completion and the computation needs to be done for each department. Trying to determine the value of those partial stages of completion requires application of the equivalent unit computation. The equivalent unit computation determines the number of units if each is manufactured in its entirety before manufacturing the next unit. For example, forty units that are 25% complete would be ten (40 × 25%) units that are totally complete.

For example, during the month of July, Rock City Percussion purchased raw material inventory of $25,000 for the shaping department. Although each department tracks the direct material it uses in its own department, all material is held in the material storeroom. The inventory will be requisitioned for each department as needed.

These costs are then used to calculate the equivalent units and total production costs in a four-step process.

Step One: Determining the Units to Which Costs Will Be Assigned

In addition to the equivalent units, it is necessary to track the units completed as well as the units remaining in ending inventory. A similar process is used to account for the costs completed and transferred. Reconciling the number of units and the costs is part of the process costing system. The reconciliation involves the total of beginning inventory and units started into production. This total is called “units to account for,” while the total of beginning inventory costs and costs added to production is called “costs to be accounted for.” Knowing the total units or costs to account for is helpful since it also equals the units or costs transferred out plus the amount remaining in ending inventory.

When the new batch of hickory sticks was started on July 1, Rock City Percussion did not have any beginning inventory and started 8,700 units, so the total number of units to account for in the reconciliation is 8,700:

All of the materials have been added to the shaping department, but all of the conversion elements have not; the numbers of equivalent units for material costs and for conversion costs remaining in ending inventory are different. All of the units transferred to the next department must be 100% complete with regard to that department’s cost or they would not be transferred. So the number of units transferred is the same for material units and for conversion units. The process cost system must calculate the equivalent units of production for units completed (with respect to materials and conversion) and for ending work in process with respect to materials and conversion.

The total materials costs for the period (including any beginning inventory costs) is computed and divided by the equivalent units for materials. The same process is then completed for the total conversion costs. The total of the cost per unit for material ($1.17) and for conversion costs ($2.80) is the total cost of each unit transferred to the finishing department ($3.97).

Step Four: Allocating the Costs to the Units Transferred Out and Partially Completed in the Shaping Department

This information is accumulated in a production cost report. This report shows the costs used in the preparation of a product, including the cost per unit for materials and conversion costs, and the amount of work in process and finished goods inventory. A complete production cost report for the shaping department is illustrated in Figure 5.6.

Kyler Industries started a new batch of paint on October 1. The new batch consists of 8,700 cans of paint, of which 7,500 was completed and transferred to finished goods. During October, the manufacturing process recorded the following expenses: direct materials of $10,353; direct labor of $17,970; and applied overhead of $9,000. The inventory still in process is 100% complete with respect to materials and 30% complete with respect to conversion. What is the cost of inventory transferred out and work in process? Assume that there is no beginning work in process inventory. 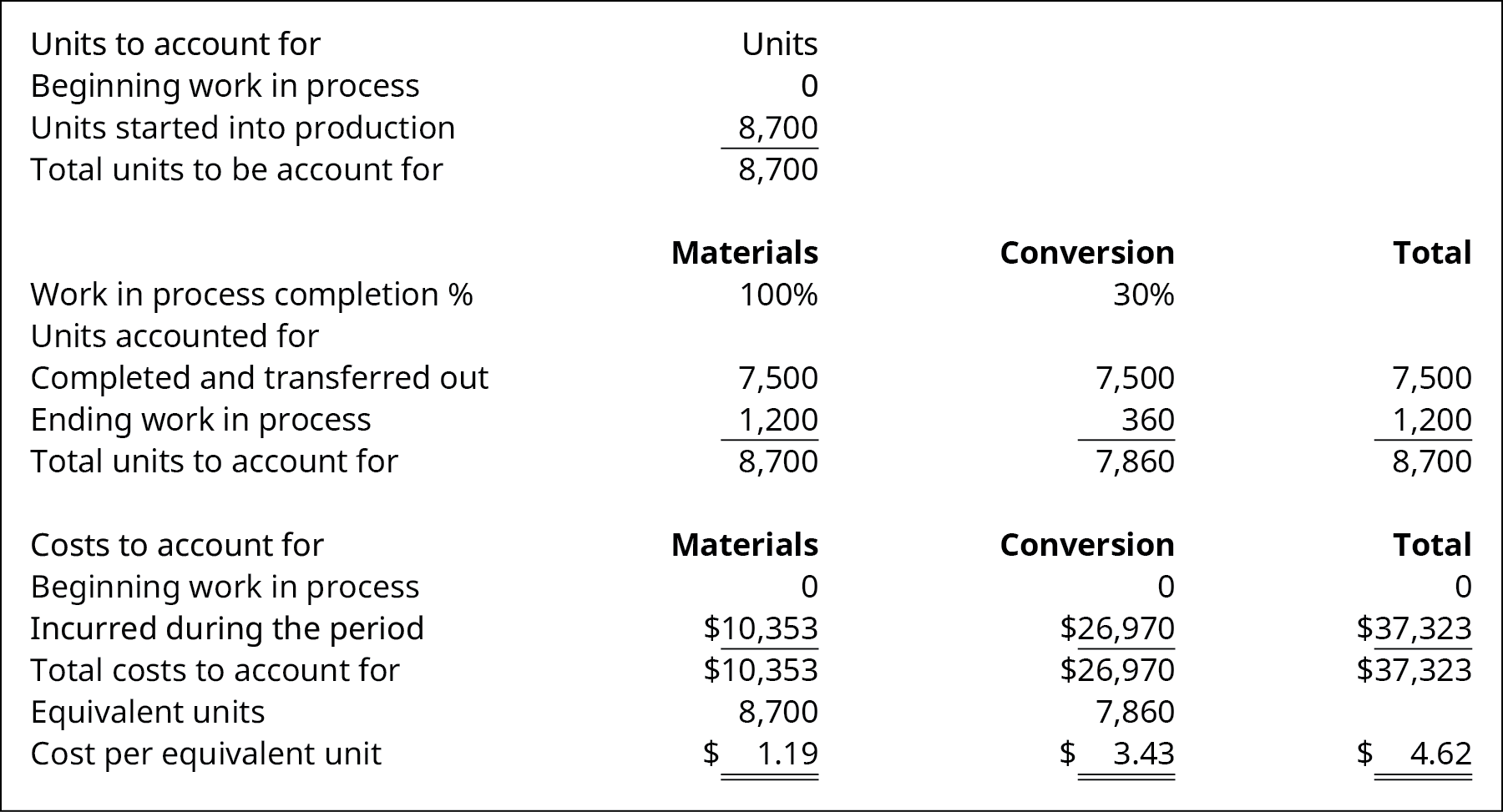