[BL][OL] Describe a scenario, for example, in which you launch a water rocket into the air. It goes up 150 ft, stops, and then falls back to the earth. Have the students assess the situation. Where would they put their zero? What is the positive direction, and what is the negative direction? Have a student draw a picture of the scenario on the board. Then draw a position vs. time graph describing the motion. Have students help you complete the graph. Is the line straight? Is it curved? Does it change direction? What can they tell by looking at the graph?

Graphing Position as a Function of Time

A graph, like a picture, is worth a thousand words. Graphs not only contain numerical information, they also reveal relationships between physical quantities. In this section, we will investigate kinematics by analyzing graphs of position over time.

Here m is the slope, defined as the rise divided by the run (as seen in the figure) of the straight line. The letter b is the y-intercept which is the point at which the line crosses the vertical, y-axis. In terms of a physical situation in the real world, these quantities will take on a specific significance, as we will see below. (Figure 2.10.)

Figure 2.10 The diagram shows a straight-line graph. The equation for the straight line is y equals mx + b.

The drive to school was 5 km from home. Let’s assume it took 10 minutes to make the drive and that your parent was driving at a constant velocity the whole time. The position versus time graph for this section of the trip would look like that shown in Figure 2.11.

Figure 2.11 A graph of position versus time for the drive to school is shown. What would the graph look like if we added the return trip?

As we said before, d0 = 0 because we call home our O and start calculating from there. In Figure 2.11, the line starts at d = 0, as well. This is the b in our equation for a straight line. Our initial position in a position versus time graph is always the place where the graph crosses the x-axis at t = 0. What is the slope? The rise is the change in position, (i.e., displacement) and the run is the change in time. This relationship can also be written

Sometimes, as is the case where we graph both the trip to school and the return trip, the behavior of the graph looks different during different time intervals. If the graph looks like a series of straight lines, then you can calculate the average velocity for each time interval by looking at the slope. If you then want to calculate the average velocity for the entire trip, you can do a weighted average.

Let’s look at another example. Figure 2.12 shows a graph of position versus time for a jet-powered car on a very flat dry lake bed in Nevada.

Figure 2.12 The diagram shows a graph of position versus time for a jet-powered car on the Bonneville Salt Flats.

Using the relationship between dependent and independent variables, we see that the slope in the graph in Figure 2.12 is average velocity, vavg and the intercept is displacement at time zero—that is, d0. Substituting these symbols into y = mx + b gives

Thus a graph of position versus time gives a general relationship among displacement, velocity, and time, as well as giving detailed numerical information about a specific situation. From the figure we can see that the car has a position of 400 m at t = 0 s, 650 m at t = 1.0 s, and so on. And we can learn about the object’s velocity, as well.

Help students learn what different graphs of displacement vs. time look like.

[Visual] Set up a meter stick.

[OL] Ask if the place that they take as zero affects the graph.

[AL] Is it realistic to draw any position graph that starts at rest without some curve in it? Why might we be able to neglect the curve in some scenarios?

[All] Discuss what can be uncovered from this graph. Students should be able to read the net displacement, but they can also use the graph to determine the total distance traveled. Then ask how the speed or velocity is reflected in this graph. Direct students in seeing that the steepness of the line (slope) is a measure of the speed and that the direction of the slope is the direction of the motion.

[AL] Some students might recognize that a curve in the line represents a sort of slope of the slope, a preview of acceleration which they will learn about in the next chapter.

In this activity, you will release a ball down a ramp and graph the ball’s displacement vs. time.

[BL][OL] Emphasize that the motion in this lab is the motion of the ball as it rolls along the floor. Ask students where there zero should be.

[AL] Ask students what the graph would look like if they began timing at the top versus the bottom of the ramp. Why would the graph look different? What might account for the difference?

So how do we use graphs to solve for things we want to know like velocity?

Find the average velocity of the car whose position is graphed in Figure 1.13.

The slope of a graph of d vs. t is average velocity, since slope equals rise over run.

Since the slope is constant here, any two points on the graph can be used to find the slope.

If the graph of position is a straight line, then the only thing students need to know to calculate the average velocity is the slope of the line, rise/run. They can use whichever points on the line are most convenient.

But what if the graph of the position is more complicated than a straight line? What if the object speeds up or turns around and goes backward? Can we figure out anything about its velocity from a graph of that kind of motion? Let’s take another look at the jet-powered car. The graph in Figure 2.13 shows its motion as it is getting up to speed after starting at rest. Time starts at zero for this motion (as if measured with a stopwatch), and the displacement and velocity are initially 200 m and 15 m/s, respectively.

Figure 2.13 The diagram shows a graph of the position of a jet-powered car during the time span when it is speeding up. The slope of a distance versus time graph is velocity. This is shown at two points. Instantaneous velocity at any point is the slope of the tangent at that point.
Figure 2.14 A U.S. Air Force jet car speeds down a track. (Matt Trostle, Flickr)

The graph of position versus time in Figure 2.13 is a curve rather than a straight line. The slope of the curve becomes steeper as time progresses, showing that the velocity is increasing over time. The slope at any point on a position-versus-time graph is the instantaneous velocity at that point. It is found by drawing a straight line tangent to the curve at the point of interest and taking the slope of this straight line. Tangent lines are shown for two points in Figure 2.13. The average velocity is the net displacement divided by the time traveled.

Calculate the instantaneous velocity of the jet car at a time of 25 s by finding the slope of the tangent line at point Q in Figure 2.13.

The entire graph of v versus t can be obtained in this fashion.

A curved line is a more complicated example. Define tangent as a line that touches a curve at only one point. Show that as a straight line changes its angle next to a curve, it actually hits the curve multiple times at the base, but only one line will never touch at all. This line forms a right angle to the radius of curvature, but at this level, they can just kind of eyeball it. The slope of this line gives the instantaneous velocity. The most useful part of this line is that students can tell when the velocity is increasing, decreasing, positive, negative, and zero.

[AL] You could find the instantaneous velocity at each point along the graph and if you graphed each of those points, you would have a graph of the velocity.

Calculate the average velocity of the object shown in the graph below over the whole time interval. 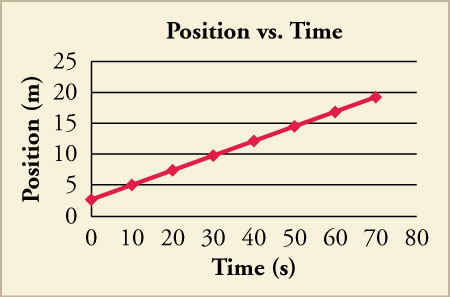 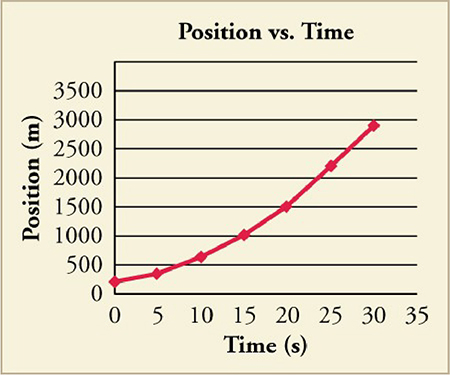 Which of the following information about motion can be determined by looking at a position vs. time graph that is a straight line?

19.
True or False: The position vs time graph of an object that is speeding up is a straight line.