[BL]Ask students to define how potential is used in everyday life. Draw the analogy between this and potential energy.

[OL][AL]Review the concept of potential energy as being the potential an object has to do work by virtue of its position with respect to another object.

[AL]Point out that sometimes the reference position is at infinity, in which case this may not be explicitly stated.

where the minus sign reflects the fact that the potential energy of the ball decreases.

The work done by gravity on the mass is

where F is the force due to gravity, and and are the initial and final positions of the ball, respectively. The negative sign is because gravity points down, which we consider to be the negative direction. For the constant gravitational field near Earth’s surface, . The change in gravitational potential energy of the mass is

Note that is just the negative of the height h from which the mass falls, so we usually just write .

This equation gives the change in electric potential energy of a charge q when it moves from position to position in a constant electric field E.

Figure 18.22 shows how this analogy would work if we were close to Earth’s surface, where gravity is constant. The top image shows a charge accelerating due to a constant electric field. Likewise, the round mass in the bottom image accelerates due to a constant gravitation field. In both cases, the potential energy of the particle decreases, and its kinetic energy increases.

Point out the fringing fields at the ends of the plates. Ask what path the charge would take if it were released in a fringing field (note that the charge does not follow the field lines due to its inertia).

Analogy between Gravity and Electricity

To recap, if charges and are free to move, they can accumulate kinetic energy by flying apart, and this kinetic energy can be used to do work. The maximum amount of work the two charges can do (if they fly infinitely far from each other) is given by the equation above.

Have students imagine that they have to push together or pull apart balls that carry these charges. Discuss which would require more work: pushing them together from far apart or from close together. Compare this with the analogous situations for the different charge combinations and for pushing together versus pulling apart.

This equation gives the energy required per unit charge to bring a charge from infinity to a distance r from a point charge Mathematically, this is written as

Coming back now to the electric potential a distance r from a point charge , note that can be any arbitrary point charge, so we can drop the subscripts and simply write

where are the distances from the center of charges to the point of interest, as shown in Figure 18.24.

Figure 18.24 The potential at the red point is simply the sum of the potentials due to each individual charge.

Notice that a positive charge in a region with high potential will experience a force pushing it toward regions of lower potential. In this sense, potential is like pressure for fluids. Imagine a pipe containing fluid, with the fluid at one end of the pipe under high pressure and the fluid at the other end of the pipe under low pressure. If nothing prevents the fluid from flowing, it will flow from the high-pressure end to the low-pressure end. Likewise, a positive charge that is free to move will move from a region with high potential to a region with lower potential.

Many animals generate and/or detect electric fields. This is useful for activities such as hunting, defense, navigation, communication, and mating. Because salt water is a relatively good conductor, electric fish have evolved in all the world’s oceans. These fish have intrigued humans since the earliest times. In the nineteenth century, parties were even organized where the main attraction was getting a jolt from an electric fish! Scientists also studied electric fish to learn about electricity. Alessandro Volta based his research that led to batteries in 1799 on electric fish. He even referred to batteries as artificial electric organs, because he saw them as imitations of the electric organs of electric fish.

Electric eels can produce electric discharges of much greater voltage than what you would get from a standard wall socket. These discharges can stun or even kill their prey. They also use low-intensity discharges to navigate. The electric fields they generate reflect off nearby obstacles or animals and are then detected by electroreceptors in the eel’s skin. The three organs that produce electricity contain electrolytes, which are substances that ionize when dissolved in water (or other liquids). An ionized atom or molecule is one that has lost or gained at least one electron, so it carries a net charge. Thus, a liquid solution containing an electrolyte conducts electricity, because the ions in the solution can move if an electric field is applied.

This geometry is reflected in batteries, which also use stacks of plates to produce larger potential differences.

If an electric eel produces 1,000 V, which voltage is produced by each electroplaque in the main organ?

This is a very small energy. However, electrons are very small, so they are easy to accelerate, and this energy is enough to make an electron go extremely fast. You can find their speed by using the definition of kinetic energy, . The result is that the electrons are moving at more than 100 million miles per hour! 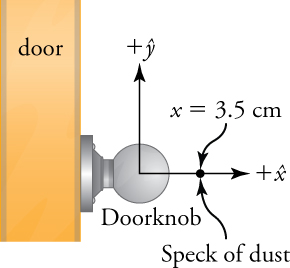 The energy is negative, which means that the energy will decrease that is, get even more negative as the speck of dust approaches the doorknob. This helps explain why dust accumulates on objects that carry a static charge. However, note that insulators normally collect more static charge than conductors, because any charge that accumulates on insulators cannot move about on the insulator to find a way to escape. They must simply wait to be removed by some passing moist speck of dust or other host.

What is the electric potential 10 cm from a −10 nC charge?

Gravitational potential energy is the potential for two masses to do work by virtue of their positions with respect to each other. What is the analogous definition of electric potential energy?