Ask students whether they have seen movies that use the concept of fields as in force fields. Have them describe how such fields work. Describe how gravity can be thought of as a field that surrounds a mass and with which other masses interact. Explain that electric fields are very similar to gravitational fields.

You may have heard of a force field in science fiction movies, where such fields apply forces at particular positions in space to keep a villain trapped or to protect a spaceship from enemy fire. The concept of a field is very useful in physics, although it differs somewhat from what you see in movies.

A field is a way of conceptualizing and mapping the force that surrounds any object and acts on another object at a distance without apparent physical connection. For example, the gravitational field surrounding Earth and all other masses represents the gravitational force that would be experienced if another mass were placed at a given point within the field. Michael Faraday, an English physicist of the nineteenth century, proposed the concept of an electric field. If you know the electric field, then you can easily calculate the force (magnitude and direction) applied to any electric charge that you place in the field.

where we are considering only electric forces. Note that the electric field is a vector field that points in the same direction as the force on the positive test charge. The units of electric field are N/C.

If the electric field is created by a point charge or a sphere of uniform charge, then the magnitude of the force between this point charge Q and the test charge is given by Coulomb’s law

This equation gives the magnitude of the electric field created by a point charge Q. The distance r in the denominator is the distance from the point charge, Q, or from the center of a spherical charge, to the point of interest.

Figure 18.17 Three-dimensional representation of the electric field generated by a positive charge.

[BL][OL]Point out that all electric field lines originate from the charge.

Figure 18.19(a) shows a two-dimensional map of the electric field generated by a charge of +q and a nearby charge of −q. The three-dimensional version of this map is obtained by rotating this map about the axis that goes through both charges. A positive test charge placed in this field would experience a force in the direction of the field lines at its location. It would thus be repelled from the positive charge and attracted to the negative charge. Figure 18.19(b) shows the electric field generated by two charges of −q. Note how the field lines tend to repel each other and do not overlap. A positive test charge placed in this field would be attracted to both charges. If you are far from these two charges, where far means much farther than the distance between the charges, the electric field looks like the electric field from a single charge of −2q.

PhET Explorations: Charges and Fields. Move point charges around on the playing field and then view the electric field, voltages, equipotential lines, and more.
Click to view content
Two positive charges are placed on a screen. Which statement describes the electric field produced by the charges?

This video explains how to calculate the electric field of a point charge and how to interpret electric-field maps in general. Note that the lecturer uses d for the distance between particles instead of r. Note that the point charges are infinitesimally small, so all their charges are focused at a point. When larger charged objects are considered, the distance between the objects must be measured between the center of the objects.

True or false—If a point charge has electric field lines that point into it, the charge must be positive.

What is the charge?

Look at the drawing of the electric field in Figure 18.20. What is the relative strength and sign of the three charges?

Figure 18.20 Map of electric field due to three charged particles.

Although we cannot determine the precise charge on each particle, we can get a lot of information from the electric field regarding the magnitude and sign of the charges and where the force on a test charge would be greatest (or least).

A doorknob, which can be taken to be a spherical metal conductor, acquires a static electricity charge of What is the electric field 1.0 cm in front of the doorknob? The diameter of the doorknob is 5.0 cm. 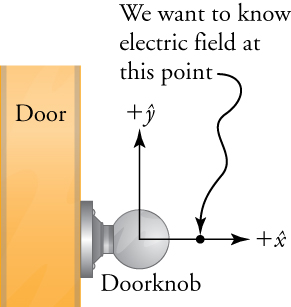 This seems like an enormous electric field. Luckily, it takes an electric field roughly 100 times stronger ( ) to cause air to break down and conduct electricity. Also, the weight of an adult is about , so why don’t you feel a force on the protons in your hand as you reach for the doorknob? The reason is that your hand contains an equal amount of negative charge, which repels the negative charge in the doorknob. A very small force might develop from polarization in your hand, but you would never notice it.

What is the magnitude of the electric field from 20 cm from a point charge of q = 33 nC?

A −10 nC charge is at the origin. In which direction does the electric field from the charge point at x + 10 cm ?