4.8 Explain How a Job Order Cost System Applies to a Nonmanufacturing Environment

Job order cost systems can be used beyond the manufacturing realm and are often used in the production of services. The same cost tracking and journaling techniques apply, as the outcome still consists of materials, labor, and overhead. However, the terminology changes in a nonmanufacturing environment. For example, a movie production studio and an accounting firm produce movies and financial statement audits, respectively, instead of manufacturing units.

Fundamentals of the Job Order Costing Method for Service Entities

Instead of being dependent on materials, service industries depend on labor. Since their work is labor intensive, it makes sense to use labor as an activity base with billable hours often as the best allocation base. For example, in an audit, there often will be several accountants, with differing levels of experience and expertise involved in the assignment. The accounting firms have more billable hours at the staff level and fewer billable hours at the partner level. And since the firm bills the partner’s time at a significantly higher rate than the staff, it makes sense to apply overhead at the billable hours instead of the billable costs.

Another terminology difference is the inventory accounts. The jobs are considered movies or assignments in process, and are transferred to a cost of service sold account instead of to a finished goods inventory.

Healthcare is one of the industries that keeps track of materials, such as medicine. In this industry, direct labor is shown to the patient as the cost of the provider, such as a physician, physician assistant, or nurse practitioner. Indirect labor includes all other personnel from front desk staff to the nurse who gathers vital signs or a technician who performs tests. Patients do not see the overhead cost on their bill, but it is built into the invoice as part of the practitioner or testing fees.

Service Entity Use of a Job Order Costing System

To understand how a service provider uses a job order cost system, let’s consider the case of IFixIT. IFixIT Systems is a Sony-authorized repair provider that fixes audiovisual equipment brought in by customers. IFixIT requires customers to pay $50 to diagnose the problem. IFixIt pays its employees $25 per hour and assigns overhead equal to its direct labor cost. The customers’ bills do not show overhead and are instead itemized as parts plus labor, where the cost for parts is the original cost plus a markup, and the labor rate is $80 per hour.

A customer brought in his TV and paid the $50 diagnostic fee. IFixIT determined a new power cord was needed. To fix it, IFixIT purchases the part from its suppliers at $42 and pays $75 in direct labor for 3 hours at $25 per hour. Overhead is applied equal to the direct labor cost of $75. The customer is charged $310, consisting of $70 for the part and 3 hours of labor at a rate of $80 per hour. IFixIT records the journal entries shown: 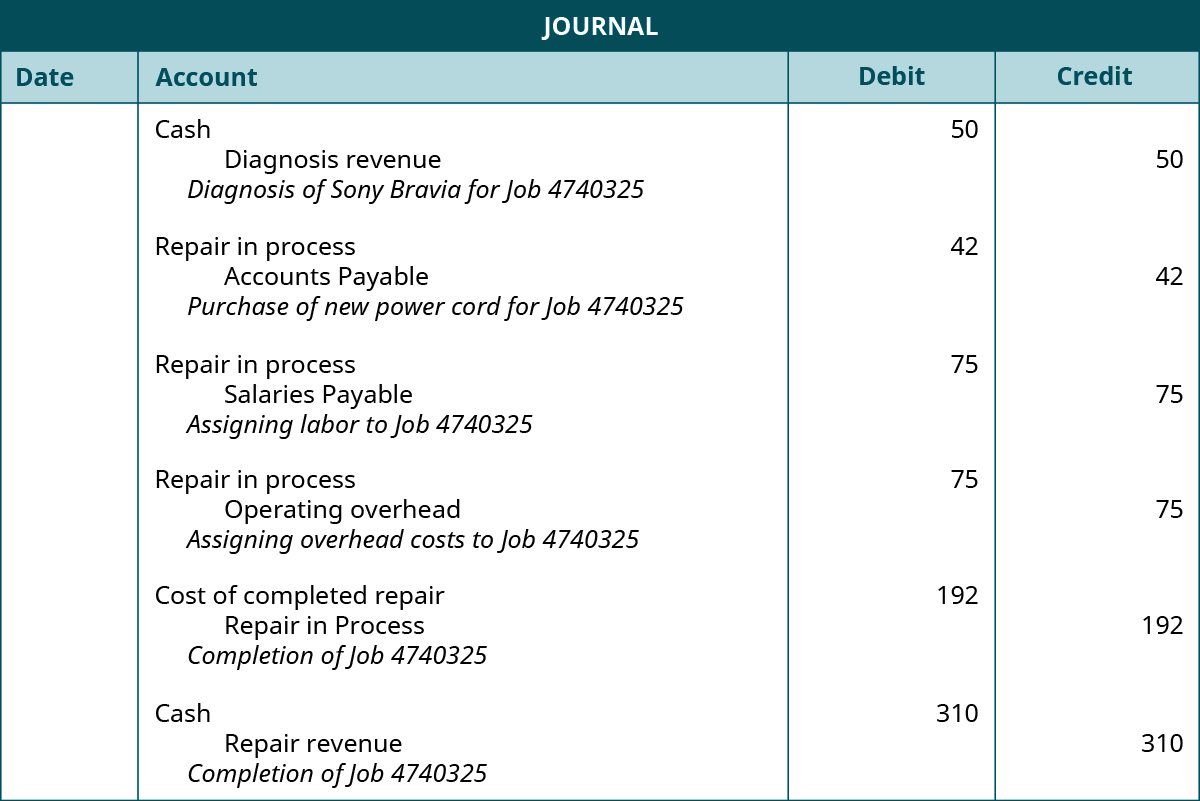 Subcontractor Misrepresentation of Costs of Jobs Used to Overbill Clients

Construction is a typical industry where job order costing and related accounting misstatements can be used to commit fraud. A construction subcontractor might overstate the units of production accomplished, the units of labor, or the equipment actually used.2 This occurs most commonly with subcontractor fraud, where the subcontractor does not perform the work but bills for it anyway.

Another complicating issue is that many subcontractors are disadvantaged business enterprises that are required by law to be included in governmental construction contracts. In Chicago, for example, McHugh Construction paid $12 million in fines to settle the claims that its disadvantaged business enterprise subcontractor did not perform work.3 The subcontractor received a prison sentence, and a related party was put on probation. An accountant had to prepare the invoices that allowed this common type of scheme to operate.