As you will see, it is not just small operations, such as the accounting club scenario provided in Why It Matters, that benefit from cost-volume-profit (CVP) analysis. At some point, all businesses find themselves asking the same basic questions: How many units must be sold in order to reach a desired income level? How much will each unit cost? How much of the sales price from each unit will help cover our fixed costs? For example, Starbucks faces these same questions every day, only on a larger scale. When they introduce new menu items, such as seasonal specialty drinks, they must determine the fixed and variable costs associated with each item. Adding menu items may not only increase their fixed costs in the short run (via advertising and promotions) but will bring new variable costs. Starbucks needs to price these drinks in a way that covers the variable costs per unit and additional fixed costs and contributes to overall net income. Regardless of how large or small the enterprise, understanding how fixed costs, variable costs, and volume are related to income is vital for sound decision-making.

Figure 3.2 Starbucks. Large corporations like Starbucks use cost-volume-profit analysis to make decisions about their products and services to ensure that they are maximizing their revenues. (credit: modification of “StarbucksVaughanMills” by “Raysonho”/Wikimedia Commons, CC0)

Understanding how to use fixed costs, variable costs, and sales in CVP analyses requires an understanding of the term margin. You may have heard that restaurants and grocery stores have very low margins, while jewelry stores and furniture stores have very high margins. What does “margin” mean? In the broadest terms, margin is the difference between a product or service's selling price and its cost of production. Recall the accounting club’s T-shirt sale. The difference between the sales price per T-shirt and the purchase price of the T-shirts was the accounting club’s margin:

Recall that Building Blocks of Managerial Accounting explained the characteristics of fixed and variable costs and introduced the basics of cost behavior. Let’s now apply these behaviors to the concept of contribution margin. The company will use this “margin” to cover fixed expenses and hopefully to provide a profit. Let’s begin by examining contribution margin on a per unit basis.

It is important to note that this unit contribution margin can be calculated either in dollars or as a percentage. To demonstrate this principle, let’s consider the costs and revenues of Hicks Manufacturing, a small company that manufactures and sells birdbaths to specialty retailers.

This means that for every Blue Jay model they sell, they will have $80 to contribute toward covering fixed costs, such as rent, insurance, and manager salaries. But Hicks Manufacturing manufactures and sells more than one model of birdbath. They also sell a Cardinal Model for $75, and these birdbaths incur variable costs of $15 per unit. For the Cardinal Model, their contribution margin on a per unit basis is the $75 sales price less the $15 per unit variable costs is as follows:

For Hicks Manufacturing and their Blue Jay Model, the contribution margin ratio will be

Margin at the Kiosk

You rent a kiosk in the mall for $300 a month and use it to sell T-shirts with college logos from colleges and universities all over the world. You sell each T-shirt for $25, and your cost for each shirt is $15. You also pay your sales person a commission of $0.50 per T-shirt sold in addition to a salary of $400 per month. Construct a contribution margin income statement for two different months: in one month, assume 100 T-shirts are sold, and in the other, assume 200 T-shirts are sold. 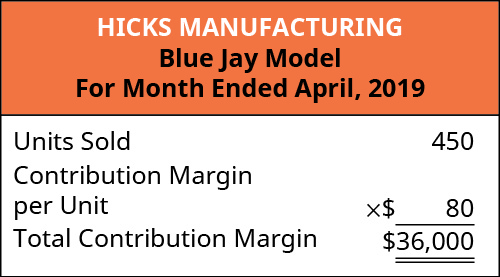 For the month of April, sales from the Blue Jay Model contributed $36,000 toward fixed costs. Looking at contribution margin in total allows managers to evaluate whether a particular product is profitable and how the sales revenue from that product contributes to the overall profitability of the company. In fact, we can create a specialized income statement called a contribution margin income statement to determine how changes in sales volume impact the bottom line.

In April, Hicks sold 500 Blue Jay Models at $100 per unit, which resulted in the operating income shown on the contribution margin income statement:

In May, 750 of the Blue Jay models were sold as shown on the contribution margin income statement. When comparing the two statements, take note of what changed and what remained the same from April to May.

Using this contribution margin format makes it easy to see the impact of changing sales volume on operating income. Fixed costs remained unchanged; however, as more units are produced and sold, more of the per-unit sales price is available to contribute to the company’s net income.

Regardless of whether contribution margin is calculated on a per-unit basis, calculated as a ratio, or incorporated into an income statement, all three express how much sales revenue is available to cover fixed expenses and contribute to profit. Let’s examine how all three approaches convey the same financial performance, although represented somewhat differently.

You will recall that the per-unit contribution margin was $80 for a Hicks Blue Jay birdbath. When Hicks sold 500 units, each unit contributed $80 to fixed expenses and profit, which can be verified from April’s income statement:

Regardless of how contribution margin is expressed, it provides critical information for managers. Understanding how each product, good, or service contributes to the organization’s profitability allows managers to make decisions such as which product lines they should expand or which might be discontinued. When allocating scarce resources, the contribution margin will help them focus on those products or services with the highest margin, thereby maximizing profits.

The Evolution of Cost-Volume-Profit Relationships

The CVP relationships of many organizations have become more complex recently because many labor-intensive jobs have been replaced by or supplemented with technology, changing both fixed and variable costs. For those organizations that are still labor-intensive, the labor costs tend to be variable costs, since at higher levels of activity there will be a demand for more labor usage. For example, assuming one worker is needed for every 50 customers per hour, we might need two workers for an average sales season, but during the Thanksgiving and Christmas season, the store might experience 250 customers per hour and thus would need five workers.

However, the growing trend in many segments of the economy is to convert labor-intensive enterprises (primarily variable costs) to operations heavily dependent on equipment or technology (primarily fixed costs). For example, in retail, many functions that were previously performed by people are now performed by machines or software, such as the self-checkout counters in stores such as Walmart, Costco, and Lowe’s. Since machine and software costs are often depreciated or amortized, these costs tend to be the same or fixed, no matter the level of activity within a given relevant range.

In China, completely unmanned grocery stores have been created that use facial recognition for accessing the store. Patrons will shop, bag the purchased items, leave the store, and be billed based on what they put in their bags. Along with managing the purchasing process, inventory is maintained by sensors that let managers know when they need to restock an item.

In the United States, similar labor-saving processes have been developed, such as the ability to order groceries or fast food online and have it ready when the customer arrives. Another major innovation affecting labor costs is the development of driverless cars and trucks (primarily fixed costs), which will have a major impact on the number of taxi and truck drivers in the future (primarily variable costs). Do these labor-saving processes change the cost structure for the company? Are variable costs decreased? What about fixed costs? Let’s look at this in more detail.

When ordering food through an app, there is no need to have an employee take the order, but someone still needs to prepare the food and package it for the customer. The variable costs associated with the wages of order takers will likely decrease, but the fixed costs associated with additional technology to allow for online ordering will likely increase. When grocery customers place their orders online, this not only requires increased fixed costs for the new technology, but it can also increase variable labor costs, as employees are needed to fill customers’ online orders. Many stores may move cashier positions to online order fulfillment rather than hiring additional employees. Other stores may have employees fill online grocery orders during slow or downtimes.

Using driverless cars and trucks decreases the variable costs tied to the wages of the drivers but requires a major investment in fixed-cost assets—the autonomous vehicles—and companies would need to charge prices that allowed them to recoup their expensive investments in the technology as well as make a profit. Alternatively, companies that rely on shipping and delivery companies that use driverless technology may be faced with an increase in transportation or shipping costs (variable costs). These costs may be higher because technology is often more expensive when it is new than it will be in the future, when it is easier and more cost effective to produce and also more accessible. A good example of the change in cost of a new technological innovation over time is the personal computer, which was very expensive when it was first developed but has decreased in cost significantly since that time. The same will likely happen over time with the cost of creating and using driverless transportation.

You might wonder why a company would trade variable costs for fixed costs. One reason might be to meet company goals, such as gaining market share. Other reasons include being a leader in the use of innovation and improving efficiencies. If a company uses the latest technology, such as online ordering and delivery, this may help the company attract a new type of customer or create loyalty with longstanding customers. In addition, although fixed costs are riskier because they exist regardless of the sales level, once those fixed costs are met, profits grow. All of these new trends result in changes in the composition of fixed and variable costs for a company and it is this composition that helps determine a company’s profit.

As you will learn in future chapters, in order for businesses to remain profitable, it is important for managers to understand how to measure and manage fixed and variable costs for decision-making. In this chapter, we begin examining the relationship among sales volume, fixed costs, variable costs, and profit in decision-making. We will discuss how to use the concepts of fixed and variable costs and their relationship to profit to determine the sales needed to break even or to reach a desired profit. You will also learn how to plan for changes in selling price or costs, whether a single product, multiple products, or services are involved.