9.4 Discuss the Role of Accounting for Receivables in Earnings Management

Principles of Accounting, Volume 1: Financial Accounting9.4 Discuss the Role of Accounting for Receivables in Earnings Management
Menu
Table of contents

Assume that you are an accountant at a large public corporation and are on a team responsible for preparing financial statements. In one team discussion, a dilemma arises: What is the best way to report earnings to create the most favorable possible financial position for your company, while still complying in an ethical manner and also complying fully with generally accepted accounting procedures (GAAP)? Your company is required to follow GAAP rules, but is there a way to comply with these rules while showing the company in its best light? How does receivables accounting factor into this quandary?

Before examining potential ways to improve the company’s financial image, let’s consider some important conditions. To begin, if the company is publicly traded on a national or regional stock exchange, it is subject to the accounting and financial regulations set by the Securities and Exchange Commission (SEC). Included in these rules is the requirement that each publicly traded company must prepare and make public each year its annual report, including the results of an extensive audit procedure performed by a major public accounting firm.

To sum up this issue, any attempts by companies to make their financial position look better must be based on assumptions by the company that can be verified by an outside, independent party, such as a major public accounting firm. As you learn about this topic, assume that any recommendations suggested must be legitimate changes in assumptions by the company and that the recommendations will pass public examination and scrutiny.

Earnings management works within GAAP constraints to improve stakeholders’ views of the company’s financial position. Earnings manipulation is noticeably different in that it typically ignores GAAP rules to alter earnings significantly. Carried to an extreme, manipulation can lead to fraudulent behavior by a company. The major problem in income manipulation is not in manipulating the numbers that constitute the financial reports. Instead, the bigger issue is the engineering of the short-term financial operating decisions. Some of the techniques used include applying universal standards, loose interpretations of revenue recognition, unofficial earnings measures, fair value accounting, and cooking the decision and not the books.4

A company may be enticed to manipulate earnings for several reasons. It may want to show a healthier income level, meet or exceed market expectations, and receive management bonuses. This can produce more investment interest from potential investors. An increase to receivables and inventory can help a business to secure more borrowed funds.

The complete financial collapse of the Enron Corporation was a catalyst for major changes in the accounting profession. Fraudulent revenue recognition and financial statement manipulation at Enron—an energy, commodities, and services company—helped provide support for the implementation of the Sarbanes-Oxley Act of 2002 (SOX). A federal law, SOX included the creation of the Public Company Accounting Oversight Board (PCAOB), a regulatory agency to oversee auditors and ensure compliance with SOX requirements.

The PCAOB is charged by the Sarbanes-Oxley Act of 2002 with establishing auditing and professional practice standards for registered public accounting firms to follow in the preparation and issuing of audit reports.5 The PCAOB regulates how publicly traded companies are audited and provides requirements and ethical standards that direct professional accountants in their work with publicly traded companies. Visit their website at www.pcaobus.org to learn more.

Accounts receivable may also be manipulated to delay revenue recognition. These deferred earnings allow for a reduced tax obligation in the current year. A company involved in the sale or acquisition of a business may show a higher income level to increase the value of the business. Whatever the reason, a company often has the flexibility to manage their earnings slightly, given the amount of estimations and potential bad debt write-offs required to meet the revenue recognition and matching principles.

One area of estimation involves bad debt in relation to accounts receivable. As you’ve learned, the income statement method, balance sheet method, and the balance sheet aging method all require estimations of bad debt with receivables. The percentage uncollectible is supposed to be presented as an educated estimation based on past performance, industry standards, and other economic factors. However, this estimation is just that—an estimation—and it can be slightly manipulated or managed to overstate or understate bad debt, as well as accounts receivable. For example, a company does not usually benefit from bad debt write-off. It might legitimately—if past experience justifies the change—alter past-due dates to current accounts to avoid having to write off bad debt. This overstates accounts receivable and understates bad debt. The company could also change the percentage uncollectible to a lower or higher figure, if its financial information and the present economic environment justify the change. The company could change the percentage from 2% uncollectible to 1% uncollectible. This increases accounts receivable and potential earnings and reduces bad debt expenses in the current period.

The Beneish M-Score is an earnings manipulation measurement system that incorporates eight financial ratios to identify potentially compromised companies. In 2000, a group of students from Cornell University used this measurement to sell all the “Cayuga Fund” stock holdings in Enron, one year before the total collapse of company. Read this article on the Cornell University Enron Case Study to learn more.

It also used the following percentage calculations for doubtful accounts under each bad debt estimation method.

Another earnings management opportunity may occur with the balance sheet aging method. Past-due categories could expand to encompass greater (or fewer) time periods, accounts receivable balances could be placed in different categories, or estimation percentages could change for each category. However, please remember that such changes would need to be considered acceptable by the company’s outside auditors during the annual independent audit.

To demonstrate the recommendation, assume that BWW has three categories: 0–30 days past due, 31–90 days past due, and over 90 days past due. These categories could change to 0–60 days, 61–120 days, and over 120 days. This could move accounts that previously had a higher bad debt percentage assigned to them into a lower percentage category. This category shift could produce an increase to accounts receivable, and a decrease to bad debt expense; thus, increasing net income estimation percentages can change within each category. The following is the original uncollectible distribution for BWW in 2018.

The following is the uncollectible percentage distribution change.

A company may also change the estimation method to produce a different net income outcome. For example, BWW may go from the income statement method to the balance sheet method. However, as mentioned, the change would have to be considered to reflect the company’s actual bad debt experiences accurately, and not just made for the sake of manipulating the income and expenses reported on their financial statements. A change in the estimation method that provides a comparison of the 2018 income statement follows. 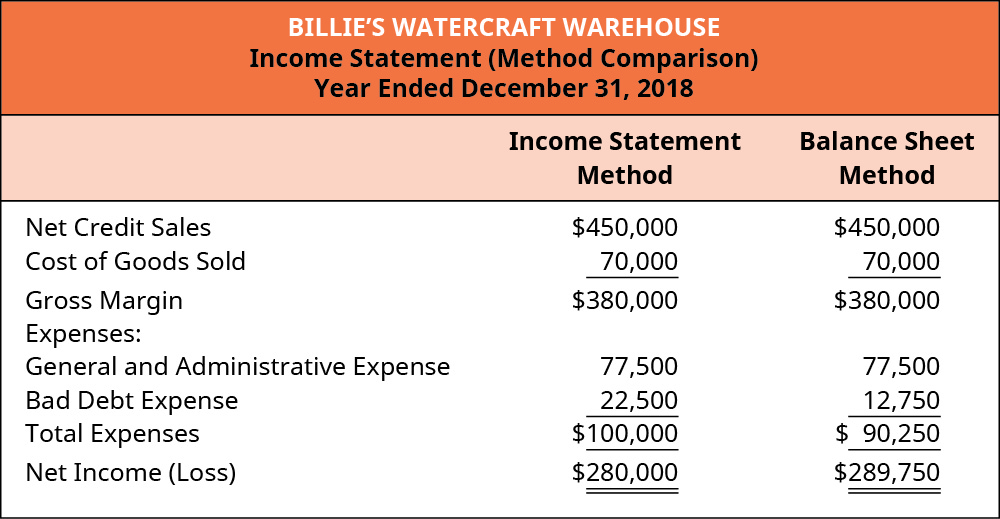 In this example, net income appears higher under the balance sheet method than the income statement method: $280,000 compared to $289,750, respectively. BWW could change to the balance sheet method for estimating bad debt to give the appearance that income is greater. An investor or lender looking at BWW may consider providing funds given the earnings performance, unaware that the estimation method alone may result in an inflated income. So, what can an investor or lender do to recognize earnings management (or manipulation)?

An investor or lender can compare ratio analysis to others in the industry, and year-to-year trend analysis can be helpful. The number of days’ sales in receivables ratio is a usually a good indicator of manipulation activity. A quicker collection period found in the first two years of operation can signal negative earnings behavior (as compared to industry standards). Earnings management can be a bit more difficult, given its acceptability under GAAP. As with uncovering earnings manipulation, due diligence with ratio and trend analysis is paramount. These topics will be covered in more depth in Appendix A: Financial Statement Analysis.

As companies become large players in industry, they may consider acquiring competitors. When acquisition discussions occur, financial information, future growth channels, and business organizational structure play heavy roles in the decision process. A level of financial transparency is expected with an acquisition candidate, but during buying negotiations, each business will present the best financial position possible. The seller’s goal is to yield a high sales price; the desire to present a rosy picture could lead to earnings manipulation. An acquirer needs to be mindful of this and review trend analysis and ratio comparisons before making a purchase decision.

Consider General Electric Company (GE). GE’s growth model in recent years was based on acquiring additional businesses within the industry. The company did not do its due diligence on several acquisitions, including Baker Hughes, and it was misled to believe the acquired businesses were in a stable financial earnings position. The acquisitions led to a declining financial position and reduced stock price. In order for GE to restructure and return to a positive growth model, it had to sell its interests in Baker Hughes and other acquisitions that were underperforming based on expectations.