In addition, the High School Physics Laboratory Manual addresses content in this section in the lab titled: Circular and Rotational Motion, as well as the following standards:

Students may get confused between deceleration and increasing acceleration in the negative direction.

Figure 6.9 A figure skater spins in the counterclockwise direction, so her angular velocity is normally considered to be positive. (Luu, Wikimedia Commons)

We can now begin to see how rotational quantities like , , and are related to each other. For example, if a motorcycle wheel that starts at rest has a large angular acceleration for a fairly long time, it ends up spinning rapidly and rotates through many revolutions. Putting this in terms of the variables, if the wheel’s angular acceleration is large for a long period of time t, then the final angular velocity and angle of rotation are large. In the case of linear motion, if an object starts at rest and undergoes a large linear acceleration, then it has a large final velocity and will have traveled a large distance.

The kinematics of rotational motion describes the relationships between the angle of rotation, angular velocity, angular acceleration, and time. It only describes motion—it does not include any forces or masses that may affect rotation (these are part of dynamics). Recall the kinematics equation for linear motion: (constant a).

As in linear kinematics, we assume a is constant, which means that angular acceleration is also a constant, because . The equation for the kinematics relationship between , , and t is

In these equations, and are initial values, is zero, and the average angular velocity and average velocity are

Storm chasers tend to fall into one of three groups: Amateurs chasing tornadoes as a hobby, atmospheric scientists gathering data for research, weather watchers for news media, or scientists having fun under the guise of work. Storm chasing is a dangerous pastime because tornadoes can change course rapidly with little warning. Since storm chasers follow in the wake of the destruction left by tornadoes, changing flat tires due to debris left on the highway is common. The most active part of the world for tornadoes, called tornado alley, is in the central United States, between the Rocky Mountains and Appalachian Mountains.

Tornadoes are perfect examples of rotational motion in action in nature. They come out of severe thunderstorms called supercells, which have a column of air rotating around a horizontal axis, usually about four miles across. The difference in wind speeds between the strong cold winds higher up in the atmosphere in the jet stream and weaker winds traveling north from the Gulf of Mexico causes the column of rotating air to shift so that it spins around a vertical axis, creating a tornado.

Tornadoes produce wind speeds as high as 500 km/h (approximately 300 miles/h), particularly at the bottom where the funnel is narrowest because the rate of rotation increases as the radius decreases. They blow houses away as if they were made of paper and have been known to pierce tree trunks with pieces of straw.

If you have ever spun a bike wheel or pushed a merry-go-round, you know that force is needed to change angular velocity. The farther the force is applied from the pivot point (or fulcrum), the greater the angular acceleration. For example, a door opens slowly if you push too close to its hinge, but opens easily if you push far from the hinges. Furthermore, we know that the more massive the door is, the more slowly it opens; this is because angular acceleration is inversely proportional to mass. These relationships are very similar to the relationships between force, mass, and acceleration from Newton’s second law of motion. Since we have already covered the angular versions of distance, velocity and time, you may wonder what the angular version of force is, and how it relates to linear force.

The angular version of force is torque , which is the turning effectiveness of a force. See Figure 6.11. The equation for the magnitude of torque is

Figure 6.11 A man pushes a merry-go-round at its edge and perpendicular to the lever arm to achieve maximum torque.

Applying a stronger torque will produce a greater angular acceleration. For example, the harder the man pushes the merry-go-round in Figure 6.11, the faster it accelerates. Furthermore, the more massive the merry-go-round is, the slower it accelerates for the same torque. If the man wants to maximize the effect of his force on the merry-go-round, he should push as far from the center as possible to get the largest lever arm and, therefore, the greatest torque and angular acceleration. Torque is also maximized when the force is applied perpendicular to the lever arm.

[BL][OL][AL] Demonstrate the physical relationships between torque, force, angle of application of force, and length of lever arm by using levers of different lengths. Help students make the connections between the physical observations and mathematical relationships. For instance, torque is maximum when the force is applied exactly perpendicular to the lever arm because for degrees.

Just as linear forces can balance to produce zero net force and no linear acceleration, the same is true of rotational motion. When two torques of equal magnitude act in opposing directions, there is no net torque and no angular acceleration, as you can see in the following video. If zero net torque acts on a system spinning at a constant angular velocity, the system will continue to spin at the same angular velocity.

This video defines torque in terms of moment arm (which is the same as lever arm). It also covers a problem with forces acting in opposing directions about a pivot point. (At this stage, you can ignore Sal’s references to work and mechanical advantage.)

If the net torque acting on the ruler from the example was positive instead of zero, what would this say about the angular acceleration? What would happen to the ruler over time?

Now let’s look at examples applying rotational kinematics to a fishing reel and the concept of torque to a merry-go-round.

Calculating the Time for a Fishing Reel to Stop Spinning

A deep-sea fisherman uses a fishing rod with a reel of radius 4.50 cm. A big fish takes the bait and swims away from the boat, pulling the fishing line from his fishing reel. As the fishing line unwinds from the reel, the reel spins at an angular velocity of 220 rad/s. The fisherman applies a brake to the spinning reel, creating an angular acceleration of −300 rad/s2. How long does it take the reel to come to a stop? 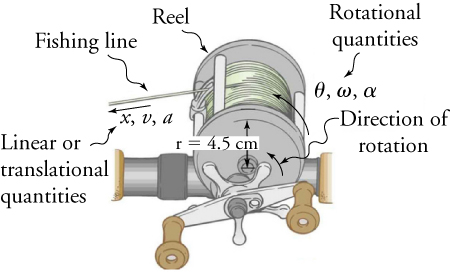 The time to stop the reel is fairly small because the acceleration is fairly large. Fishing lines sometimes snap because of the forces involved, and fishermen often let the fish swim for a while before applying brakes on the reel. A tired fish will be slower, requiring a smaller acceleration and therefore a smaller force.

Calculating the Torque on a Merry-Go-Round

To find the torque, note that the applied force is perpendicular to the radius and that friction is negligible.

The man maximizes the torque by applying force perpendicular to the lever arm, so that and . The man also maximizes his torque by pushing at the outer edge of the merry-go-round, so that he gets the largest-possible lever arm.

What is the equation for angular acceleration, α? Assume θ is the angle, ω is the angular velocity, and t is time.

19.
Which of the following best describes torque?
20.
What is the equation for torque?

Use the Check Your Understanding questions to assess whether students master the learning objectives of this section. If students are struggling with a specific objective, these questions will help identify which objective is causing the problem and direct students to the relevant content.