[AL] Check prior knowledge of conduction and convection.

The equation for heat transfer Q is

[BL][OL][AL]Explain that this formula only works when there is no change in phase of the substance. The transfer of thermal energy, heat, and phase change will be covered later in the chapter.

Temperature Change of Land and Water

What heats faster, land or water? You will answer this question by taking measurements to study differences in specific heat capacity.

Procedure
Soil has an approximate specific heat of 800 J / kg °C. A farmer monitors both the soil temperature of his field and the temperature of a nearby pond as winter sets in. Will the field or the pond reach 0 °C first and why?

There are three different heat transfer methods: conduction, convection, and radiation. At times, all three may happen simultaneously. See Figure 11.3.

Conduction is heat transfer through direct physical contact. Heat transferred between the electric burner of a stove and the bottom of a pan is transferred by conduction. Sometimes, we try to control the conduction of heat to make ourselves more comfortable. Since the rate of heat transfer is different for different materials, we choose fabrics, such as a thick wool sweater, that slow down the transfer of heat away from our bodies in winter.

As you walk barefoot across the living room carpet, your feet feel relatively comfortable…until you step onto the kitchen’s tile floor. Since the carpet and tile floor are both at the same temperature, why does one feel colder than the other? This is explained by different rates of heat transfer: The tile material removes heat from your skin at a greater rate than the carpeting, which makes it feel colder.

[BL][OL][AL] Ask students what the current temperature in the classroom is. Ask them if all the objects in the room are at the same temperature. Once this is established, ask them to place their hand on their desk or on a metal object. Does it feel colder? Why? If their desk is Formica laminate, then it will feel cool to their hand because the laminate is a good conductor of heat and draws heat from their hand creating a sensation of “cold” due to heat leaving the body.

Some materials simply conduct thermal energy faster than others. In general, metals (like copper, aluminum, gold, and silver) are good heat conductors, whereas materials like wood, plastic, and rubber are poor heat conductors.

Figure 11.4 shows particles (either atoms or molecules) in two bodies at different temperatures. The (average) kinetic energy of a particle in the hot body is higher than in the colder body. If two particles collide, energy transfers from the particle with greater kinetic energy to the particle with less kinetic energy. When two bodies are in contact, many particle collisions occur, resulting in a net flux of heat from the higher-temperature body to the lower-temperature body. The heat flux depends on the temperature difference . Therefore, you will get a more severe burn from boiling water than from hot tap water.

Convection is heat transfer by the movement of a fluid. This type of heat transfer happens, for example, in a pot boiling on the stove, or in thunderstorms, where hot air rises up to the base of the clouds.

In everyday language, the term fluid is usually taken to mean liquid. For example, when you are sick and the doctor tells you to “push fluids,” that only means to drink more beverages—not to breath more air. However, in physics, fluid means a liquid or a gas. Fluids move differently than solid material, and even have their own branch of physics, known as fluid dynamics, that studies how they move.

As the temperature of fluids increase, they expand and become less dense. For example, Figure 11.4 could represent the wall of a balloon with different temperature gases inside the balloon than outside in the environment. The hotter and thus faster moving gas particles inside the balloon strike the surface with more force than the cooler air outside, causing the balloon to expand. This decrease in density relative to its environment creates buoyancy (the tendency to rise). Convection is driven by buoyancy—hot air rises because it is less dense than the surrounding air.

Sometimes, we control the temperature of our homes or ourselves by controlling air movement. Sealing leaks around doors with weather stripping keeps out the cold wind in winter. The house in Figure 11.5 and the pot of water on the stove in Figure 11.6 are both examples of convection and buoyancy by human design. Ocean currents and large-scale atmospheric circulation transfer energy from one part of the globe to another, and are examples of natural convection.

Figure 11.5 Air heated by the so-called gravity furnace expands and rises, forming a convective loop that transfers energy to other parts of the room. As the air is cooled at the ceiling and outside walls, it contracts, eventually becoming denser than room air and sinking to the floor. A properly designed heating system like this one, which uses natural convection, can be quite efficient in uniformly heating a home.
Figure 11.6 Convection plays an important role in heat transfer inside this pot of water. Once conducted to the inside fluid, heat transfer to other parts of the pot is mostly by convection. The hotter water expands, decreases in density, and rises to transfer heat to other regions of the water, while colder water sinks to the bottom. This process repeats as long as there is water in the pot.

[BL][OL] Electromagnetic waves are also often referred to as EM waves. We perceive EM waves of different frequencies differently. Just as we are able to see certain frequencies as visible light, we perceive certain others as heat.

You can feel the heat transfer from a fire and from the sun. Similarly, you can sometimes tell that the oven is hot without touching its door or looking inside—it may just warm you as you walk by. Another example is thermal radiation from the human body; people are constantly emitting infrared radiation, which is not visible to the human eye, but is felt as heat.

Radiation is the only method of heat transfer where no medium is required, meaning that the heat doesn’t need to come into direct contact with or be transported by any matter. The space between Earth and the sun is largely empty, without any possibility of heat transfer by convection or conduction. Instead, heat is transferred by radiation, and Earth is warmed as it absorbs electromagnetic radiation emitted by the sun.

Figure 11.7 Most of the heat transfer from this fire to the observers is through infrared radiation. The visible light transfers relatively little thermal energy. Since skin is very sensitive to infrared radiation, you can sense the presence of a fire without looking at it directly. (Daniel X. O’Neil)

All objects absorb and emit electromagnetic radiation (see Figure 11.7). The rate of heat transfer by radiation depends mainly on the color of the object. Black is the most effective absorber and radiator, and white is the least effective. People living in hot climates generally avoid wearing black clothing, for instance. Similarly, black asphalt in a parking lot will be hotter than adjacent patches of grass on a summer day, because black absorbs better than green. The reverse is also true—black radiates better than green. On a clear summer night, the black asphalt will be colder than the green patch of grass, because black radiates energy faster than green. In contrast, white is a poor absorber and also a poor radiator. A white object reflects nearly all radiation, like a mirror.

Ask students to give examples of conduction, convection, and radiation.

In this animation, you will explore heat transfer with different materials. Experiment with heating and cooling the iron, brick, and water. This is done by dragging and dropping the object onto the pedestal and then holding the lever either to Heat or Cool. Drag a thermometer beside each object to measure its temperature—you can watch how quickly it heats or cools in real time.

Selecting the fast forward option lets you speed up the heat transfers, to save time.

Have students consider the differences in the interactive exercise results if different materials were used. For example, ask them whether the temperature change would be greater or smaller if the brick were replaced with a block of iron with the same mass as the brick. Ask students to consider identical masses of the metals aluminum, gold, and copper. After they have stated whether the temperature change is greater or less for each metal, have them refer to Table 11.2 and check whether their predictions were correct.

Calculating the Required Heat: Heating Water in an Aluminum Pan

Water can absorb a tremendous amount of energy with very little resulting temperature change. This property of water allows for life on Earth because it stabilizes temperatures. Other planets are less habitable because wild temperature swings make for a harsh environment. You may have noticed that climates closer to large bodies of water, such as oceans, are milder than climates landlocked in the middle of a large continent. This is due to the climate-moderating effect of water’s large heat capacity—water stores large amounts of heat during hot weather and releases heat gradually when it’s cold outside.

Calculate the temperature increase of 100 kg of brake material with an average specific heat of 800 J/kg from a 10,000 kg truck descending 75.0 m (in vertical displacement) at a constant speed. 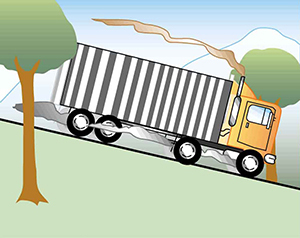 We first calculate the gravitational potential energy (Mgh) of the truck, and then find the temperature increase produced in the brakes.

This temperature is close to the boiling point of water. If the truck had been traveling for some time, then just before the descent, the brake temperature would likely be higher than the ambient temperature. The temperature increase in the descent would likely raise the temperature of the brake material above the boiling point of water, which would be hard on the brakes. This is why truck drivers sometimes use a different technique for called “engine braking” to avoid burning their brakes during steep descents. Engine braking is using the slowing forces of an engine in low gear rather than brakes to slow down.

Calculate the change in temperature of 1.0 kg of water that is initially at room temperature if 3.0 kJ of heat is added.

Use these questions to assess student achievement of the section’s learning objectives. If students are struggling with a specific objective, these questions will help identify which and direct students to the relevant content.