The figure below shows a series of states for typical G protein signal transduction.

Use this representation to describe the following stages in this signaling process: 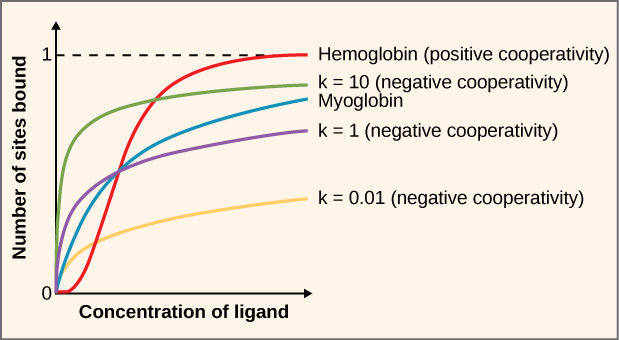 Tyrosine kinase receptors are pairs of proteins that span the plasma membrane. On the extracellular side of the membrane, one or more sites are present that bind to signaling ligands such as insulin or growth factors. On the intracellular side, the ends of peptide chains on each protein phosphorylate the other member of the pair, providing active docking sites that initiate cellular responses. The signal is switched off by dissociation of the ligand. For each ligand-receptor system, the equilibrium constant, k, controls the distribution of receptor-bound and unbound ligands. In systems with large values of k, a site is likely to be occupied, even at low concentrations of ligand. When k is small, the likelihood of binding is low, even when the concentration of ligand is high. To initiate a new stimulus response cycle for the receptor, the ligand must dissociate. Larger values of k mean that the receptor is more likely to be occupied and thus unavailable to bind another ligand.

Organisms, including plants, have evolved chemical signaling pathways to direct physiological responses to environmental changes. Stomata are pores, typically on the underside of leaves that regulate CO2, O2, and H2O exchange between plants and the external environment. This interaction controls photosynthetic rate and transpiration rate. The opening and closing of stomata are controlled by specialized guard cells that surround the stomatal pore. The osmotic state within the guard cells determines their turgor; when the guard cells are flaccid, stomata close. Turgor in the guard cells is regulated by the active transport of several ions, including K+ and H+, across the plasma membrane. Several environmental factors can cause stomatal closing: water deficit, darkness, microbes, ozone, and sulfur dioxide and other pollutants. Intracellular carbon dioxide concentration and light can trigger stomata to open.

The system is regulated by a phytohormone (plant hormone) called abscisic acid (ABA) and the amino acid precursor of the synthesis of a second phytohormone called ethylene (ACC). The second messengers NO and Ca2+ in the signal response to changes in the concentrations of these hormones activate transcription factors that affect ion transport across guard cell membranes. High CO2 levels and light also alter phytohormone concentrations.

A. Explain why plants must regulate the opening and closing of stomata. Explain how this response relates to the capture of free energy for cellular processes.

B. Construct an explanation in terms of the water potential, Y, for the efflux (outward flow) of H+ during water stress (drought).

C. Consider a scenario involving environmental factors, such as water stress and daylight, which have opposing effects on the opening and closing of stomata; stomata would be signaled to close under drought conditions and to open during photosynthesis. Pose two scientific questions regarding the response of the system, one involving the phytohormones ABA and ACC, and the second involving the concentration of second messengers.

D. The data shown in the table below were obtained by treating rockcress (Arabidopsis) with doses of ABA, ACC, and ABA plus ACC. Using the terms and and or, describe the expected and unexpected responses of the system just after 10 minutes and around 45 minutes, as displayed by these data.

E. Researchers are investigating the interactions among multiple signaling pathways, a phenomenon referred to as “crosstalk.” The same second messengers, NO and Ca2+, are used in many different signaling pathways. Construct an explanation by analogy to other phenomena in which combining a small set of events (for example, 0 and 1 in a computer, the musical scale, or the R, G, and B components of a color) can lead to a vast assortment of outcomes.

Construct a graphical representation of information as a function of time during the transduction of a signal along a signaling pathway.

A. Use your graph to describe trends in the amount of information rather than the actual magnitude. In sketching your graph, consider how the shape of the curve would change during these events:

B. Annotate your representation for a specific signaling system, such as the effect of epinephrine on the free energy released from glucose.

A. Describe the advantage of antibiotics to the organisms that produce them.

B. Based on the name of the emerging strategy for controlling bacterial infections, describe a possible mechanism by which bacteria determine their population density. Justify the claim that quorum quenching may provide a more sustainable approach to disease control than the use of antibiotics.