During transcription, the enzyme RNA polymerase moves along the DNA template, reading nucleotides in a 3′ to 5′ direction, with U pairing with A and C with G, and assembling the mRNA transcript in a 5′ to 3′ direction. In prokaryotes, mRNA synthesis is initiated at a promoter sequence on the DNA template. Transcription continues until RNA polymerase reaches a stop or terminator sequence at the end of the gene. Termination frees the mRNA and often occurs by the formation of an mRNA hairpin.

Information presented and the examples highlighted in the section support concepts outlined in Big Idea 3 of the AP® Biology Curriculum Framework. The Learning Objectives listed in the Curriculum Framework provide a transparent foundation for the AP® Biology course, an inquiry-based laboratory experience, instructional activities, and AP® Exam questions. A Learning Objective merges required content with one or more of the seven Science Practices.

Ask students to draw a timeline of the steps needed for transcription and add all the different components as specific shapes. Use different colors to label the promoter and the terminator sequences.

Review the complementarity of nitrogenous bases and the stability of base pairing as a function of number of hydrogen bonds. The couple AT/AU is much less stable than CG; therefore promoter sequences will be rich in AT because it takes less energy to unzip DNA.

Ask the students, How do you recognize the beginning of a sentence? They may answer that they see a period. Answer that some abbreviations are followed by a period. So the period is not enough. Upper case is not enough either. It is the combination of period followed by a space and an upper case which indicates the beginning of a sentence. In the same way consensus sequences, which indicate a promoter region where an RNA polymerase binds, contain several elements that are required for recognition.

Use a diagram to illustrate rho-independent termination. The following drawing may clarify the text in the chapter.

There can be more than one consensus sequence in a genome as there are several sigma factors that recognize different sequences. Clarify, if necessary, the role of the sigma factor and rho proteins. Students confuse transcription, termination, and stop codons.

Ask students to diagram a generic gene and label the following regions in the correct sequence in the 5'-3' direction. The regions are given in the correct order here. Change the order when giving the exercise to the class:

The Science Practice Challenge Questions contain additional test questions for this section that will help you prepare for the AP exam. These questions address the following standards:
[APLO 2.23][APLO 3.28][APLO 4.8][APLO 4.24]

The prokaryotes, which include bacteria and archaea, are mostly single-celled organisms that, by definition, lack membrane-bound nuclei and other organelles. A bacterial chromosome is a covalently closed circle that, unlike eukaryotic chromosomes, is not organized around histone proteins. The central region of the cell in which prokaryotic DNA resides is called the nucleoid. In addition, prokaryotes often have abundant plasmids, which are shorter circular DNA molecules that may only contain one or a few genes. Plasmids can be transferred independently of the bacterial chromosome during cell division and often carry traits such as antibiotic resistance.

Transcription in prokaryotes (and in eukaryotes) requires the DNA double helix to partially unwind in the region of mRNA synthesis. The region of unwinding is called a transcription bubble. Transcription always proceeds from the same DNA strand for each gene, which is called the template strand. The mRNA product is complementary to the template strand and is almost identical to the other DNA strand, called the nontemplate strand. The only difference is that in mRNA, all of the T nucleotides are replaced with U nucleotides. In an RNA double helix, A can bind U via two hydrogen bonds, just as in A–T pairing in a DNA double helix.

Initiation of Transcription in Prokaryotes

Prokaryotes do not have membrane-enclosed nuclei. Therefore, the processes of transcription, translation, and mRNA degradation can all occur simultaneously. The intracellular level of a bacterial protein can quickly be amplified by multiple transcription and translation events occurring concurrently on the same DNA template. Prokaryotic transcription often covers more than one gene and produces polycistronic mRNAs that specify more than one protein.

Prokaryotes use the same RNA polymerase to transcribe all of their genes. In E. coli, the polymerase is composed of five polypeptide subunits, two of which are identical. Four of these subunits, denoted α, α, β, and β' comprise the polymerase core enzyme. These subunits assemble every time a gene is transcribed, and they disassemble once transcription is complete. Each subunit has a unique role; the two α-subunits are necessary to assemble the polymerase on the DNA; the β-subunit binds to the ribonucleoside triphosphate that will become part of the nascent “recently born” mRNA molecule; and the β' binds the DNA template strand. The fifth subunit, σ, is involved only in transcription initiation. It confers transcriptional specificity such that the polymerase begins to synthesize mRNA from an appropriate initiation site. Without σ, the core enzyme would transcribe from random sites and would produce mRNA molecules that specified protein gibberish. The polymerase comprised of all five subunits is called the holoenzyme.

A promoter is a DNA sequence onto which the transcription machinery binds and initiates transcription. In most cases, promoters exist upstream of the genes they regulate. The specific sequence of a promoter is very important because it determines whether the corresponding gene is transcribed all the time, some of the time, or infrequently. Although promoters vary among prokaryotic genomes, a few elements are conserved. At the -10 and -35 regions upstream of the initiation site, there are two promoter consensus sequences, or regions that are similar across all promoters and across various bacterial species (Figure 15.7). The -10 consensus sequence, called the -10 region, is TATAAT. The -35 sequence, TTGACA, is recognized and bound by σ. Once this interaction is made, the subunits of the core enzyme bind to the site. The A–T-rich -10 region facilitates unwinding of the DNA template, and several phosphodiester bonds are made. The transcription initiation phase ends with the production of abortive transcripts, which are polymers of approximately 10 nucleotides that are made and released.

View this MolecularMovies animation to see the transcription process as it happens in the cell. 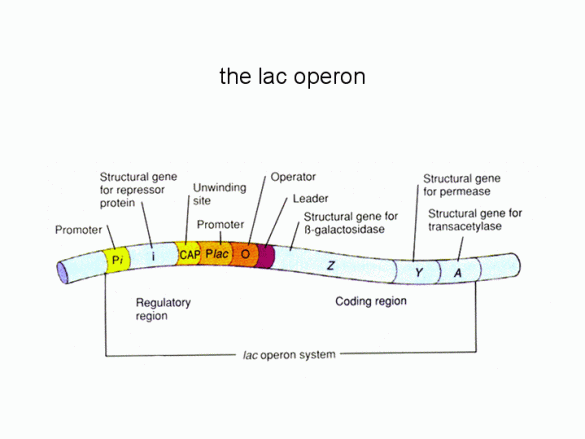 What is a likely outcome of a mutation in the promoter sequence?

Elongation and Termination in Prokaryotes

The transcription elongation phase begins with the release of the σ subunit from the polymerase. The dissociation of σ allows the core enzyme to proceed along the DNA template, synthesizing mRNA in the 5' to 3' direction at a rate of approximately 40 nucleotides per second. As elongation proceeds, the DNA is continuously unwound ahead of the core enzyme and rewound behind it (Figure 15.8). The base pairing between DNA and RNA is not stable enough to maintain the stability of the mRNA synthesis components. Instead, the RNA polymerase acts as a stable linker between the DNA template and the nascent RNA strands to ensure that elongation is not interrupted prematurely.

Figure 15.8 During elongation, the prokaryotic RNA polymerase tracks along the DNA template, synthesizes mRNA in the 5' to 3' direction, and unwinds and rewinds the DNA as it is read.

Once a gene is transcribed, the prokaryotic polymerase needs to be instructed to dissociate from the DNA template and liberate the newly made mRNA. Depending on the gene being transcribed, there are two kinds of termination signals. One is protein-based and the other is RNA-based. Rho-dependent termination is controlled by the rho protein, which tracks along behind the polymerase on the growing mRNA chain. Near the end of the gene, the polymerase encounters a run of G nucleotides on the DNA template and it stalls. As a result, the rho protein collides with the polymerase. The interaction with rho releases the mRNA from the transcription bubble.

Rho-independent termination is controlled by specific sequences in the DNA template strand. As the polymerase nears the end of the gene being transcribed, it encounters a region rich in C–G nucleotides. The mRNA folds back on itself, and the complementary C–G nucleotides bind together. The result is a stable hairpin that causes the polymerase to stall as soon as it begins to transcribe a region rich in A–T nucleotides. The complementary U–A region of the mRNA transcript forms only a weak interaction with the template DNA. This, coupled with the stalled polymerase, induces enough instability for the core enzyme to break away and liberate the new mRNA transcript.

Upon termination, the process of transcription is complete. By the time termination occurs, the prokaryotic transcript would already have been used to begin synthesis of numerous copies of the encoded protein because these processes can occur concurrently. The unification of transcription, translation, and even mRNA degradation is possible because all of these processes occur in the same 5' to 3' direction, and because there is no membranous compartmentalization in the prokaryotic cell (Figure 15.9). In contrast, the presence of a nucleus in eukaryotic cells precludes simultaneous transcription and translation.

Figure 15.9 Multiple polymerases can transcribe a single bacterial gene while numerous ribosomes concurrently translate the mRNA transcripts into polypeptides. In this way, a specific protein can rapidly reach a high concentration in the bacterial cell.

Visit this BioStudio animation to see the process of prokaryotic transcription.

Visit this BioStudio animation to see the process of prokaryotic transcription.
Why is the stop codon necessary for translation?

Working in small groups, use a model of DNA to demonstrate synthesis transcription of mRNA to other groups in your class. In your demonstration, be sure to distinguish the differences between DNA and RNA, the template and non-template strands of the DNA, the directionality of transcription, and the significance of promoters.

The Think About It question is an application of Learning Objective 3.1 and Science Practice 6.5 because students are using a model to explain the process of transcription as well as how both DNA and RNA are carriers of heritable information.

DNA is different from RNA in that T nucleotides in DNA are replaced with U nucleotides in RNA. Therefore, they could never be identical in base sequence. A gene would not lack T residues as the initiation codon is AUG for methionine.
PreviousNext
Order a print copy